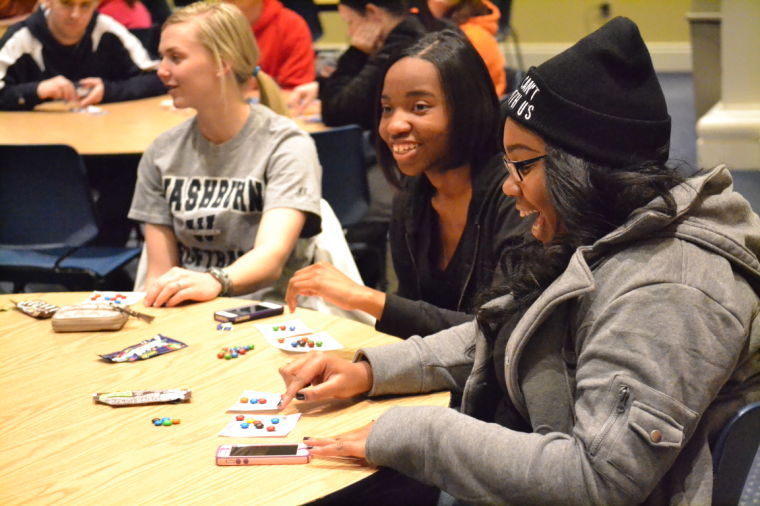 Lillian Moss with her first Bingo of the night at Grocery Bingo in the Bradbury Thompson Center on January 30.

Smiling faces filled the Bradbury Thompson Alumni Center this past Thursday, January 30, as students gathered to try their luck in a game of Grocery Bingo.

Unlike ordinary Bingo, Grocery Bingo prizes consist of practical items for the average college student, including meals, snacks, and cleaning supplies. Soups, chips, crackers, and beverages were piled up before the contestants, waiting to be won.

Grocery Bingo was not only a time of competition however, but also one of socialization. Many friends were made that night along with numerous jokes and conversations. But as the time for the first round drew closer, it seemed clear everyone was there for the same exact reason: to win.

The first Bingo prize of Thursday night went to Washburn student Rachel Elias who was asked how it felt to be the first winner of the night.

“I’m surprised. I didn’t know I could be this lucky,” Elias said.

Elias walked away with a bag of assorted goodies including Macaroni, chips, granola bars, oranges, and many other college snacks.

The second winner of the night was junior Shaelea Steeby, psychology major, who walked away with another large bag.

“This is the first time I’ve ever won Bingo!” Steeby said.

After Steeby’s win, the event moved on, continuing first with traditional Bingo rules but then progressing to more abstract goals, such as Four Corners, X, and Black Out. Changing the rules appeared to add a little drama to the game and tensions seemed to rise as the edible prizes continued to dwindle away.

The assortment bags were the first to vanish and then the cases of soda.

“Bingo!” was heard above murmurs, chitchat, and finally groans of disappointment as the last winner claimed the final prize, a pack of Clorox wipes.

For information about other fun campus activities, check out Washburn University Campus Activities Board Facebook page: