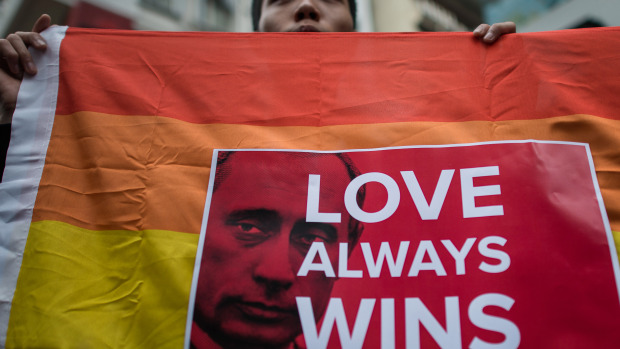 Pussy Riot is a feminist punk rock group that formed in response to Putin running for a third presidential term. The group’s name is meant to invoke sexual agency and bodily power for women.

Vladimir Putin began his third non-consecutive term as president of the Russian Federation in 2012. Although he received 63 percent of the vote, thousands protested, accusing the government of corruption.

Putin’s alliance with the Russian Orthodox Church was criticized, as well as the policies enforcing traditional Russian values. One of the most notable groups to protest Putin and his policies is Pussy Riot.

Pussy Riot is a feminist punk rock group that formed in response to Putin running for a third presidential term. The group’s name is meant to invoke sexual agency and bodily power for women.

The group is against Putin, the policies of his government and is opposed to the treatment of gays in Russia. They also protest the oppression of women and the patriarchal value system.

The group gained notoriety with public forms of protest by combining music and performance art and recording it on video. Some of the members took to kissing female members of the Russian police and recording it as a form of protest. Pussy Riot’s members are all well-educated women intent on protesting the government.

In February 2012, five members of Pussy Riot, wearing brightly colored ski masks, staged a protest of Putin and the Russian Orthodox Church, which endorsed him.

They entered the St. Basil’s Cathedral and danced on the altar to a prerecorded song denouncing Putin. The lyrics begged the Virgin Mary to become a feminist and oppose Putin, which shocked and offended many Russians.

Three of the five members of Pussy Riot involved were captured. The musicians were charged with “hooliganism motivated by religious hatred.”

Two of the members, Nadezhda Tolokonnikova and Maria Alyokhina, were sentenced to two years in prison. The other member was released because she had not stepped foot on the altar and was therefore not a part of the “religious hatred.”

Tolokonnikova and Alyokhina were released before the Olympics began in 2014. Many speculated that their release was to avoid unwanted attention at the international level.

Internal conflicts between the members of Pussy Riot have occurred as some members feel Tolokonnikova and Alyokhina have strayed from the original mission of the group. Although the group has received a high level of support in the international community, the Russian public does not approve of them as strongly.

A video hit the Internet Feb. 19, 2014, of Tolokonnikova and Alyokhina being beaten with whips by Cossacks during protests in Sochi. They titled the video and song “Putin Will Teach You To Love Your Country.” The goal of the protest was to speak out against the recent Russian policies against homosexuality.

The artists staged a performance calling for a makeshift press conference. Several members of the media were present waiting for Pussy Riot to appear. Pussy Riot appeared in their brightly colored ski masks, and other groups arrived to counter-protest.

At least five male university students, along with a man in a chicken costume, arrived to protest Pussy Riot’s staged press conference. The counter protestors shouted in broken English, “We like sex with chickens,” while pulling out raw chicken. The counter-protest group intended to disrupt Pussy Riot’s protest efforts because they were concerned that Pussy Riot would desecrate a Russian Orthodox cathedral on the outskirts of Sochi.

“We don’t understand their behavior and that’s why we’re protesting,” said Sergei Barashov, a 23-year-old university student and counter-protestor.

Pussy Riot is the most publicly visible group to oppose the policies of Putin and the Russian Federation, but their actions are controversial in Russia. In spite of popular support from the Western media, Pussy Riot is not expressing the views of the majority of Russia’s citizens.

With the international exposure of Pussy Riot, the counter-protests and the controversy surrounding Russian policies, Russia has become the stage for the global struggle for the civil rights of homosexuals.