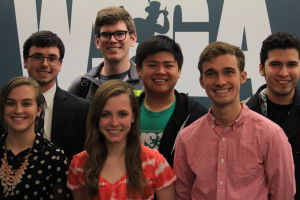 Washburn Student Government Association announced the results of the 2014 election campaign March 7. The event took place down at 5 p.m. in the lower level of the Union, several of the running candidates were on hand to witness the results.

During the announcement ceremonies, elected officials spoke publicly showing their appreciation to their campaign staffs, Washburn University and students for giving them the opportunity to serve on the WSGA. The election results were posted on the office door of WSGA giving the names of candidates as well as the number of votes received by each.

“I think a lot more students would have gotten involved if we would have been contested,” added McAfee. “Competition would have given us a chance to have debates as well as more elaborate campaigns.”

According to White and McAfee, being uncontested did not take away from their feeling of accomplishment in the elections. However, they both felt that more students should be taking  the opportunity to pursue student government.

“I am still satisfied with the win even though it is by default,” said White. “It would have been nice to have the challenge of competing against another campaign. Not so much for the ‘I am better than you thing,’ but for more engagement in the election by the students. I feel like students get scared when they hear the word ‘government’ and tend to shy away from it, but  in reality, student government and the WSGA is all about advocacy.”

According to the duo, students should be aware of their ability to have a voice in what happens in the campus community, which is something WSGA strives to do. The students that serve on WSGA play an important role by giving the student populous a voice on Washburn committees where a student representative is needed.

WSGA is also responsible for deciding where a portion of the student activity fee paid by each student goes and where it is needed the most.

White and McAfee plan on improving the learning environment at Washburn for students. They would like to create a single-page on Washburn.edu outlining scholarships and their availability. Also the new elects plan to work with the community to bring more savings to students as well as enhance job opportunities locally for students. The two are interested in any ideas that students have to offer.

“Student feedback is very important to the WSGA,” said McAfee. “Students really do have a voice here at Washburn.”