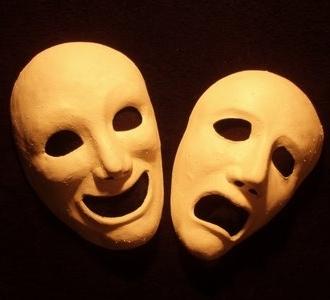 The costumes were perfect for the story. Keely wore a hospital gown converted into a nightgown, this costume accented the helpless situation and powerlessness of the character.

Washburn University’s production of “Keely and Du” by Jane Martin, was directed by Sharon L. Sullivan and performed in White Concert Hall on Feb. 21, 22, 28 and March 1, 2014, the last performance was cancelled due to heavy snow, the play was as thought provoking as it was controversial.

The plot revolved around three central characters Keely, Du and Walter, but introduced a fourth character, Cole, played by Dalton Hane. All of the action took place in a basement that was realistically recreated using subdued lighting, an old hot water heater and a door with an intercom system that gave the illusion of entering the basement from a landing after going down a flight of stairs. It was quite clear from the onset that the room was secured.

Other furnishings that enhanced the basement atmosphere included a wooden rocking chair positioned next to an old metal frame single size bed reminiscent of a 1950’s hospital ward. This was juxtaposed with a bright purple fringed chenille bedspread and fluffy pillow.

Also, adding to the contrast the drab environment of the basement setting was a basket of brightly colored crochet work that set beside the rocker and brought attention to the floor that had been painted a dull white. A small dorm room brown refrigerator, a small shelf and a wooden chair with a stiff back completed the set that was bathed in dim light from a single hanging light with large metal shade.

The exposition began with Du, portrayed by Heather Ives, entering and fussing around the bed, as if expecting a daughter to return home from college. She was singing a song that would be the only music for the entire show, the type of song your mother might sing as she went about her household duties, the same type that gets stuck in your head. Her singing was interrupted by an offstage voice that clearly indicated the intercom was being used.

Walter, portrayed by Travis Lamb, was let in by Du. He surveyed the room before Keely, portrayed by Lauren Kalp, made her stage entrance on a gurney. Keely then was masterfully transferred, by supporting cast members Alex Laughlin and Mia Capuano who were dressed as orderlies, to the bed and chained to prevent her escape. Keely was unconscious, everyone was wearing masks so it was quite clear that Keely had been abducted.

The lighting served not only to let the audience know they were in a basement but also to mark time. The audience instinctively knew that applause during these scene transitions would detract from the play and withheld their applause until the end.

The costumes were perfect for the story. Keely wore a hospital gown converted into a nightgown, this costume accented the helpless situation and powerlessness of the character. At one point she had to do a costume change on stage and did it so expertly it flowed seamlessly.

For the last few scenes Keely wore normal dresses. Du wore a matronly outfit complete with white sweater, apron and skirt revealing her motherly intentions, while Walter was dressed in business casual, which helped elevate his character illustrating that he was in charge.

The spectacle of the play mirrored the staging and was subdued but outbursts from Keely and Walter served to give the play energy for forward momentum. Keely was portrayed a bit over the top, as her dialogue was delivered in anger with almost every line. Not seeing a softer, more vulnerable side to Keely made it difficult to connect to the character. She revealed that she had been a rape victim and that was why she was having the abortion.

Walter was also played in a highly zealousness fashion that left little room for vulnerability and humanity to come through. However, he was extremely convincing in his role as an extremist prolife activist. Walter’s monologues were full of intense energy, he was hard to sympathize with as he just didn’t quite get to all the layers of emotion.

“[The play] favored abortion. I had been told the play gave a balanced view, but it wasn’t,” said Gentry Cork, a Washburn student and prolife advocate, she felt the play made prolife look bad. “[The play made me] uncomfortable” and that she was in a state of “awe.”

“It made my skin crawl,” said Cork, regarding the scene in which Cole, Keely’s ex-husband and rapist, who is brought in to convince her to live a good life in Christ with him and their child she was carrying.  Cork was also jarred by Keely’s lack of remorse regarding her abortion.

No matter what your personal view on abortion is, this performance was intense, thought provoking and controversial. There were some shocking moments that created a heavy shared silence among the audience. The cast delivered a memorable performance. Although the topic is mature, this is a must see play.

The cast did come together to deliver an intense cohesive performance that would make the group 1 in 3 proud, whose goal is to get conversation started about abortion and to try to take the stigma away from women that do have abortions. This play got people thinking, if not talking about the subject.

Be sure to mark your calendar for Washburn’s up-coming production of “The Language Archive” by Julia Cho, directed by Penny Weiner. The performances are scheduled for mid-April 2014. Your opportunity to see the production will be April 18, 19, 25 & 26 at 7:30 p.m. and April 27 at 2:00 p.m.