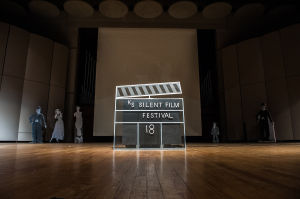 The Kansas Silent Film Festival, founded by Jim Rhodes and James McShane of Topeka and Shawnee County Public Libraries, hosted their 18th annual festival at White Concert Hall. Fans flocked from near and far to partake in the activities and remember the times.

“You gotta like films, but it’s different from what we have now,” said Marty Schill. “Technology is moving so fast and in so many things, with the tablets and the iPhones.  There’s more of a human quality to silent films.”

The festival showed movies such as “Modern Times” with Charlie Chaplin, and “The Patsy” with Marion Davies. They even showed older animated films like “Charlie on the Windmill” from 1916. The stage was set with an organ, a special effects set that was manually operated and a giant screen behind them. The festival is even able to keep movies on film reels, mainly 16 millimeter.

Films are also made on 8-, 16-, 35- and 75-millimeter film. With the transition into the digital age, silent films, which were cherished by many, have the opportunity to be shared by the masses and stored for future generations to treasure.

The first movie was made in the late 1870s and the oldest surviving film is titled “Louis Le Prince” in 1888. That film marked the beginning of the “Silent Era,” which lasted from the 1890s to the 1920s. More than 50 percent of the silent films made have been lost or destroyed.

The “Silent Era” ended in 1937 with the introduction of “talkies.” Talkies (movies with voice recordings) started in 1927 and after 10 years, silent movie production stopped. The short time spent with silent films gave a rich understanding of the times and social standards that were lived by.

“Silent films were made in a purer time,” said Anita Schill, silent film fan.  “Ladies were treated like ladies and gentlemen acted like gentlemen, and the language was very limited, not like the language you have in the movies nowadays. It was a purer time.”

Some upcoming events will include the 11th annual Safari Days April 25-26 in Chanute, Kan., and the Godzilla and Friends Festival VIII May 2 and 3 in Henderson Room 110.

For a complete list of upcoming events and information visit www.kssilentfilmfest.org