Table Talk: Dining Out course being offered at Washburn 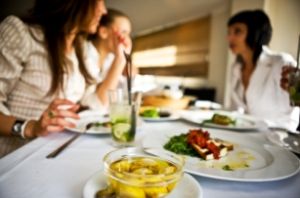 Thomas Averill, an English professor and Kelly Erby, a history professor, have been cooking up something delightful for Washburn this semester. Created by  these two professors, a new course is being offered, ‘Dining Out in History Literature and Film.’

The evolution of this course, which involves both intrigue and bribery, began three years ago when Erby was interviewing at Washburn University.

As part of a playing chip to encourage her services, Erby was whisked to Averill’s office when it became known that they both shared a common interest in food, and the history and meaning of dining out in particular.

The course is one of the results Averill says is “the widening of the nets in both of our disciplines as to what can be studied, and what can be revealed from those studies.”

Over a period of three years, both Averill and Erby have planned the course and are happy to finally be able to teach it this semester.

Why do we dine out? What is the difference between eating out and dining out? When did we even start eating outside of the home? These are just a few of the many questions that are pondered and explored in the dining out course.

The context of the class is drawn from a mixture of historical articles, film and fiction, including the novel “Secrets of the Tsil Cafe” written by Averill himself.

The materials are supported by generous open discussion and the assignments include food journals, reflective papers and coercive eating out at variously themed restaurants.

The idea behind the homework, Averill and Erby explain, is for the students to gain a deeper understanding of their personal dining experiences, and apply that understanding to the world around them.

The goal of the course is “to get the students to think more about everyday experiences.”

By doing this, they hope that students will analyze their surroundings and actions more, and have retrospective thoughts about the various experiences they encounter in daily life.

“The best education changes the way you look and view world,” said Averill.

That is just what he and Erby hope will be the doggy bag the students carry away from this new course.