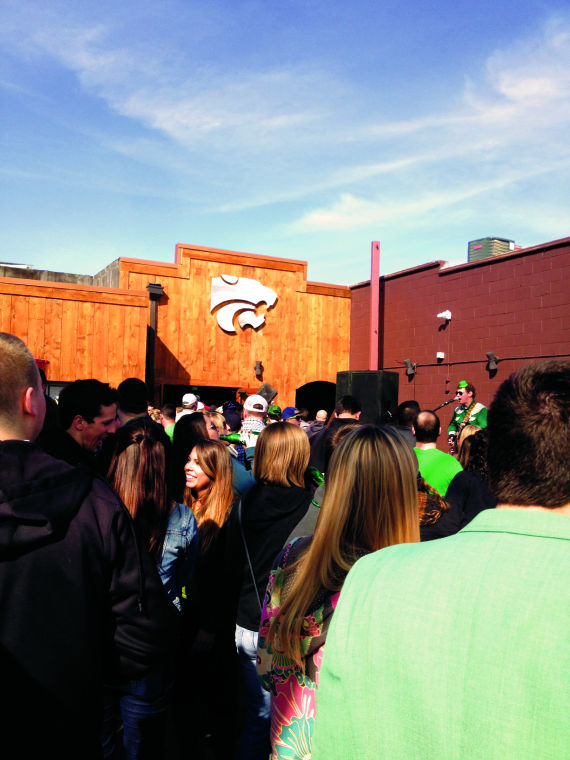 Manhattan, Kan. hosted its annual Fake Patty’s Day celebration March 8 throughout the Aggieville district, which attracted people throughout the state. People walked throughout Aggieville dressed in green apparel and accessories such as face tattoos and glow in the dark jewelry, usually with a green drink in their hand. The day models itself as a pseudo celebration of St. Patrick’s Day for college students.

“It’s an experience to say the least. It’s a bunch of people having a good time and wearing a lot of green,” said Josh Maples, a Washburn alumnus.

Since St. Patrick’s Day mostly falls during the spring break portion of the calendar, an alternative to the day was created. FPD is usually placed on the Saturday before spring break, which allows students to celebrate together before everyone runs off to their respective vacation sites.

“It brought together a few friendships with people that I haven’t seen in a while. I saw some people who I went to high school with, who I grew up with and who I went to college with,” said Maples.

With so many people visiting Manhattan, transportation became a huge issue throughout the night. The streets of Aggieville were blocked off leaving many people to walk more than 10 blocks or asking for a cab or bus ride throughout the day. Some had to wait more than an hour for a 5 minute cab drive. This did not deter Washburn students to join in on the festivities.

“I was expecting it to be a great event and it turned out to be exactly that. It was great and it exceeded my expectations,” said Omar Chavez, junior biology major at Washburn.

Since 9 a.m. people flocked Aggieville to visit the local bars and eateries. This was the earliest that bars were legally allowed to sell alcohol. The bars used their own different methods to deal with the amount of people.

Most used the wristband method to control the traffic of people entering and leaving a business. The day also allowed for unique partnerships to form. Local bars like Kite’s and Rusty’s Last Chance Saloon offered a $20 wristband which allowed entrance to both bars and two free drinks in either establishment.

The local food businesses accommodated the morning crowd with an array of breakfast buffets that included festive foods like green eggs and ham. Food stations were also placed in the middle of the streets that featured quick and accessible food like hamburgers, hot dogs, breakfast burritos and funnel cakes.

Many restaurants stayed open late as well. The local businesses took advantage of the event to display their unique food options like the Keltic Star’s authentic fish and chips and Pita Pit’s healthy pita roll options.

However, there were concerns from the large influx of people visiting Riley County all at once. The county police department police release for the weekend revealed that 234 calls were made for service. Clint Castor, member of the Riley County Fire Department, circulated the different bars throughout the night for safety measures.

These calls included citizen complaints such as parking problems, disturbing the peace and unwanted subjects. In addition to complaints 73 people were arrested in the county for disorderly conduct, DUI, unlawful possession by minors and drug offenses.

In total, 541 citations were issued on Fake Patty’s Day. Castor states that while there are still issues to be taken care of, the event has been a more peaceful one throughout the years.