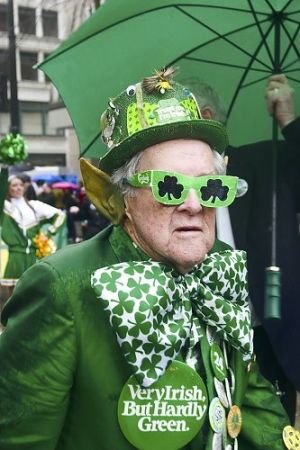 I knew it was March when I was walking in a store flanked by shirts that read “Drink ‘til you’re Irish,” “An Irishman walked out of a bar … No seriously” and “Kiss me. I’m drunk or Irish or whatever.” Across the aisle were fake red beards so that you too could look like me for a day. The most depressing part is that I am used to it. All my friends keep asking how drunk I am going to get this year. This is who I am. I am a “Mick.”

To elaborate on my statement, I am an Irishman. “Mick” is an ethnic slur used by the English and the Americans to label Irish Catholics like me. Though the term’s historic use was to degrade people, I will embrace it. I am proud of my heritage. I am a “Mick,” but I don’t play the “Mick” as a stereotype for your amusement.

March is defined in the United States by St. Patrick’s Day. Everything gets a fresh coat of Kelly Green and every bar and restaurant features a seasonal battery of Irish beer and whiskey. Flogging Molly and The Dropkick Murphys blare at festivalsand Shamrocks become ubiquitous decorations for the season. It is truly a season for shenanigans.

To me and other Irish Catholics, St. Patrick’s Day is a day of ethnic and cultural pride. Before anyone accuses me of being bitter or “no fun,” let me first say I love this holiday. I welcome anyone to wear green and come out to join the festivities. I enjoy Flogging Molly and The Dropkick Murphys, green is my favorite color and I appreciate Irish whiskey and Irish beer. What I do not enjoy, however, is how pervasive negative stereotypes are played out for entertainment or consumerism.

I encourage people to enjoy Irish culture and history, but I do not approve of exploitation. The shirts about drinking to be Irish perpetuate a negative and harmful stereotype. Alcoholism is a serious matter. Regardless of ethnic heritage, alcoholism has a devastating impact on families and individuals. When people make jokes or ask me how drunk I will get this year on St. Patrick’s Day, it reinforces what society expects an Irishman like me to do.

I refuse to internalize the negative stereotypes. I am a “Mick” but not a cartoon stereotype existing to drink too much and start a fight for your entertainment. To some I may look like that cartoon “Paddy” but I don’t want to sell you Lucky Charms or green Bud Light. We Irish are more than that.

We are the fighting Irish, but this is not to say we are drunken fighters for your amusement. We have a history of fighting for a different reason. The real luck of the Irish is to be Irish. We make our own luck. Our people fought through famine, discrimination and war. The diaspora spread the Irish to the United States, Canada and Australia in search of a new home. Upon arrival in the United States they fought for acceptance.

Angry Americans who did not accept the immigrants who might take their jobs met the Irish at the docks. The “Know-Nothing Party” formed specifically to stop the Irish from gaining a foothold on American soil.

The Irish Catholic was portrayed as inferior. They were classified as below “whites” and made into apelike cartoons. The Irish fought through this period of American history and proved to belong and defy the stereotypes. In the 1960s, Americans were worried that Irish Catholic John Fitzgerald Kennedy would turn the country over to the pope.

St. Patrick’s Day is a day of ethnic pride. It is a celebration of the fighting Irish spirit. The Irish fought to move from being seen as a menace to Irish-Americans. I march in the parades as part of a group that celebrates our history and our culture. I encourage you to wear green, Irish or not, because the celebration is about more than Irish pride alone.

America  often forgets its history. Today groups of immigrants trying to escape poverty come to America in search of jobs and I see many oppose them. When Bill O’Reilly shouts about immigrants causing problems, it is clear many of us have forgotten our own past. In part, I feel we forget the real meaning of St. Patrick’s Day in favor of what is easy to exploit for entertainment and sales. This is partly why our history is lost.

To me, the epitome of the meaning being lost in favor of stereotype exploitation is Fake Patty’s Day. Irish culture, history and pride are abandoned to sell more alcohol. It has no connection to the patron saint or the Irish struggle. It is an exploitation of the Irish alcoholic stereotype to sell drinks to college students.

I encourage people to have fun on St. Patrick’s Day and celebrate American history and ethnic pride, but I discourage defamation.