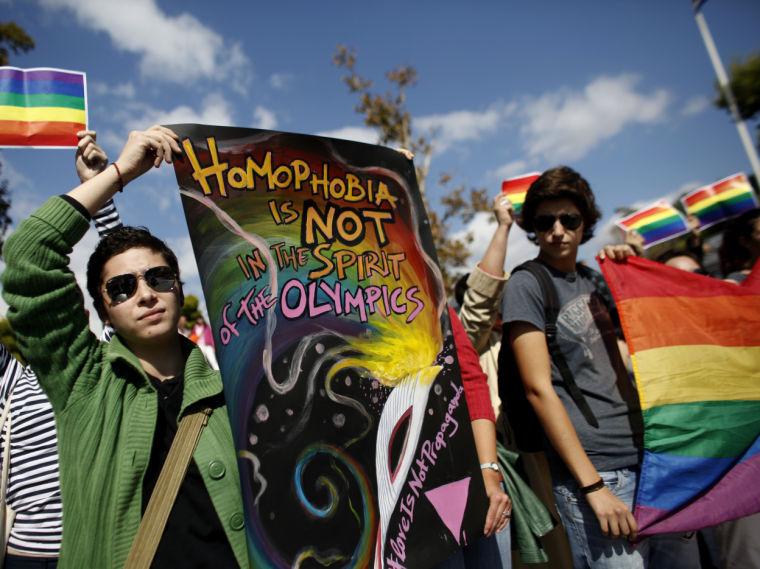 With the international exposure of Pussy Riot, the counter-protests and the controversy surrounding Russian policies intersecting as the world’s eyes fall on the Olympics in Sochi, Russia has become the stage for the global struggle for the civil rights of homosexuals. Vladimir Putin appears at the center of the controversy and, to the Western media, plays the role of a villain.

In reality, Russia serves as a dark mirror for the United States. As Putin signed legislation that discriminates against homosexuals in Russia, a bill was drafted in Kansas that would allow discrimination against homosexuals on a religious basis. The same bill recently passed in Arizona. Critics of Putin’s Russia were quick to point out his connections with the Russian Orthodox Church, but the failure to separate church and state is also a reality in the United States.

It is necessary to try and avoid ethnocentric views of Russian society that assume Russians are enthusiastic to celebrate gay bashing. The Russian policy is an attempt to protect Russian youth from being exposed to outside ideas about sexuality that conservative Russians find threatening to their values. Most individuals in any society do not relish in the idea of oppressing others; that would be an inaccurate assessment of the reality. The danger in viewing Russian policies in such a manner is that it leads to misinformation about how discrimination takes root.

Most groups that create discriminatory policies do not view themselves as oppressing anyone, but rather as protecting themselves.  In a similar manner the legislators of Kansas created the bill that would allow discrimination against homosexuals as way of allowing individuals to reject services if it offended their religious beliefs.

It is necessary to understand that the Russians are not evil, neither are Kansans who support the potential law. Understanding discrimination is difficult, as it requires an effort to abandon preconceptions that vilify others’ groups. Vilifying Russians seems to be a lingering side effect of the Cold War, but the reality is that the Russian Federation is not the Soviet Union, and Putin is not Josef Stalin.

It may not be accurate to state that Putin is more prejudiced against homosexuals than some conservative politicians in the United States.

“If you want my personal attitude, I would tell you that I don’t care about a person’s orientation and I myself know some people who are gay. We are on friendly terms. I’m not prejudiced in any way,” said Putin in a 2011 interview with Andrew Marr of the BBC.

The goal of the Russian law against homosexual propaganda to minors is to protect Russian youth from being exposed to non-traditional values about sexuality. This is directly mirrored in politics in the United States.

“This is a very serious matter, because it is our children who are the prize for this community. They are specifically targeting our children,” said Michele Bachmann, a senator from Minnesota, on gay community and same-sex marriage in a 2004 radio interview.

Most of the criticisms of Putin can be found in the politics of the United States as well. Putin’s ties to oligarchs could be compared to the ties politicians like Mitt Romney or Dick Cheney have to corporations. Putin’s rise from the KGB to politics can be compared to George H.W. Bush’s rise from director of the CIA. Accusations of tampering with the democratic process can be seen both with Putin’s third term and with in the 2000 Florida ballot controversy in the United States.

Putin is a target for criticisms, but the discriminatory policies targeting homosexuals can also be observed in the United States. Between the Sochi Olympics and Pussy Riot as a media magnet, the spotlight has been placed on Russia. The struggle for homosexuals to have civil rights is an ongoing international struggle, and though Russia is the most visible battleground, the United States is not free of controversy.

It is necessary to avoid ethnocentric views of other cultures in international news stories. It leads to a misunderstanding of both the other group and our own issues. It is easy to look at another group and cathartically criticize them for the faults that remain unresolved in our own society.

The reality is that the Cold War has ended and there is no longer a need to perceive Russians as a threat to Americans. Reducing Russians to villains is analogous to reducing other Kansans to villains, which does not help foster progress in a changing world.