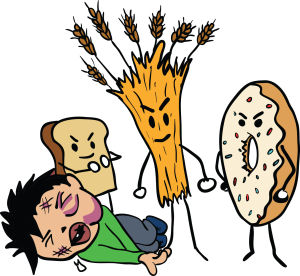 Washburn University food service offers limited choices to students who have celiac disease or those who are sensitive to gluten. Some students find it frustrating there aren’t more options available to them and want to see changes.

“The gluten-free options that the Union offers to students who have celiac disease or sensitivity to gluten are absolutely awful,” said Sara Escandon, a sophomore social work major.

According to Psychiatric Quarterly, celiac disease is an immune-meditated disease dependent on gluten (a protein present in wheat, rye or barley) that occurs in about 1 percent of the population and is generally characterized by gastrointestinal complaints.

Escandon said her favorite option is the salad but does not like the fact they changed the rules on how a student can order. Students used to be able to get a salad with anything on it, but now they limit the type of meats and cheese that is allowed unless you pay extra.

“I’m fed up paying extra all the time. I have a budget just the same as the next kid, but what costs him $5 costs me double and it’s not fair to discriminate against those of us who have a legitimate disease because it is ‘inconvenient,’” said Escandon.

Some of the gluten-free foods students would like to have are; pasta, salad dressing, a potato bar, tacos, stir-fry, roast and fried chicken, but they need to know there won’t be a chance of cross-contamination.

They also feel it is important to have a list of ingredients available to read so they know what they are putting in their body, and a schedule of when these options are sold so they know when to make a trip to the union.

Devrin Forte, a worker in the Union cafeteria, said he used to work at the Topeka Natural Food Co-op for 10 years where he ordered the groceries and dealt with special diets, so he knows the needs of gluten-free students.

“We have several gluten-free students who come in. I’d like to see more options available to them,” said Forte.

The food service workers realize it is frustrating for students with the disease to eat from the cafeteria but are not sure what the future holds for what will be served.