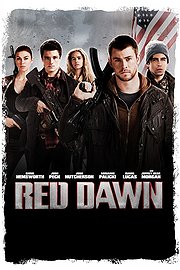 “Red Dawn” is a remake of the 1984 version, both movies follow a group of teenagers who band together to take on forces invading their town, the only significant difference between the two versions is the one from 1984 has invading Soviet forces, whereas the new version has invading North Korean forces.