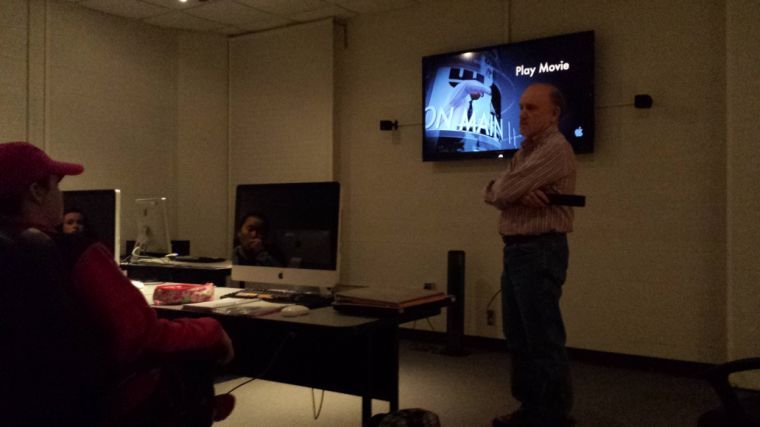 Cranston has more than 10 years of experience in film and video. He now shared that knowledge with students at Washburn.

Washburn University film and video professor Charles Cranston continues to inspire his film students and provides them with opportunities that will prepare the future filmmakers for the real film industry.

In fall 2013, Cranston came up with a Washburn Transformational Experience proposal titled, “American Film Studios & Hollywood: The Historical Perspective,” which was approved by Mike Russell, the Washburn WTE coordinator in spring 2014.

This study is an outstanding opportunity for Washburn film and video students as it is intended for them to have a better understanding of how the film industry works, as well as enrich their knowledge of film history by visiting historical landmarks in Los Angeles. “The fact that there is an ‘Exploring America’ project that students can get through WTE as a group was a key player in me making this decision,” said Cranston. “I always wanted to take a group of film students on a Hollywood study tour and this was an excellent way to do that”.

Cranston and seven students will be travelling to Los Angeles June 1 and will return June 8. They will be staying in a rental house at Laguna Beach and will use two rental cars for the course of their visit. Each student received $1,000 through WTE funding, which covers all the air fare, housing and car rental fees. Students are responsible to pay for all the tours, food, personal expenses and any other activities that they would like to do during their stay.

During their week-long historical tour, students will be able to investigate historical sound stages where classic films were made, explore back lots where early television programs were created and where new ones are in production, visit craft and scenic preparation shops, set construction venues, special effects sets, historic buildings and talk with studio historians as well as other people working in the industry.

Students will also visit the offices of the Directors Guild of America, and the American Film Institute where they offer educational programs and courses throughout the year. A campus tour of facilities at Chapman University, Dolby Theatre and UCLA Film School is also on the agenda.

For the duration of the trip, students will be required to compile a diary of their daily activities, have specific questions to ask at each venue and develop their activities for a written report at the end of the study tour. They will also be required to give a public presentation on campus and share their experience with other Washburn students and faculty in order to fulfill the requirements of the WTE.

“I am very excited for this opportunity,” said Jeremy Finnestad, a junior, mass media major. “I have never been in L.A. and it is a must for all film students. Not to mention, it’s going to be a great experience to add to my resume.”