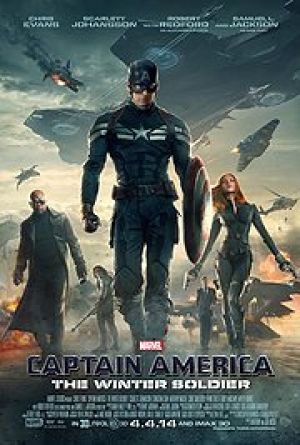 In the second installment, Rogers is battling to find his place in the world from the place he once new. Through his struggles to find his place, he faces a new enemy who has a ghost story like him.

The enemy’s name is the Winter Solider. The two go head-to-head in an action-packed thrill ride that kept me on the edge of my seat. I will not spoil it for anyone, but will say it is just a movie that fans have to see.

This movie by far is one of my favorites in the franchise of “The Avengers” and since I read the comics it was great to see the story come to life. One thing that was fun for me is that even in the most intense situation they still found a way to bring humor into the movie.

For example, Natasha Romanoff, Black Widow, played by Scarlett Johansson, tells Rogers to ask certain girls that work for SHIELD out on dates while they are trying to save hostages on a ship.

I thought this scene was great because I could tell the two work very well on camera together to make the scenes flow with no interruption.

The fight sequences in the movie between Captain America and the Winter Soldier were so intense that I was on edge the entire time. Watching it in the theater, everyone let out a loud yell of excitement when one of the characters was knocked into a building.

I was surprised by how real the fighting looked and I also loved the special effects because the characters looked as if they had real scars.

Personally, I have always liked the Captain America comics and the Winter Soldier storyline. The movie did not deviate from the story line of the comics, which made it great to see.

If there was any difference from the comics, they were subtle and not noticeable to me. I also enjoyed the fact that they had no dead spots in the movie, and it never seemed to drag on too long in any scene.

The movie can be seen in 2-D and 3-D.  I saw it in 2-D and I personally don’t believe it has to be seen in 3-D, though I plan to see it again in 3-D to see the differences between them.

If you like this movie, then here are some other Marvel movies to check out, “Thor: the Dark World,” “Captain America: The First Avenger,” “Iron Man 2” and “The Avengers.”