“How I Met Your Mother” series finale stuns audiences 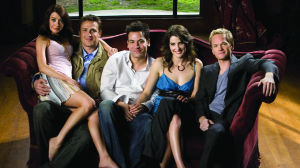 After nine seasons, the CBS sitcom “How I Met Your Mother” came to an end March 31. The show centered on the simple premise of friends hanging out, but with a twist. Ted Mosby, one of the main characters, attempts to sit down with his children and explain to them the entire adventure of how he came to meet their mother.

Throughout the seasons he describes his adventures with his friends: Barney, Marshall, Lily and Robin. Over the years many have laughed and cried with them, who ended up becoming more like family.

The finale begins the night of Barney and Robin’s wedding, with Ted holding a one-way ticket to Farhampton. However, as his friends notice the next day, Ted couldn’t leave New York City. He found the love of his life.

The last season of the show led up to Barney and Robin’s wedding. Viewers were also able to see flashbacks of some shared moments of Ted and his future wife, who is finally revealed as Tracy McConnell.

This is usually where a story is supposed to end but what was described was roughly the first ten minutes of the show. The word that best describes the roller coaster of events that happened through the hour-long finale of HIMYM is ‘shocked.’

A little less than halfway into the finale it’s revealed that Robin and Barney could never make it last. Robin’s career as an international journalist creates a tear in their relationship that could never be mended. The two divorce in what appeared to be a mutual agreement.

Barney and Robin live out their separate lives and adjust to the changing lifestyle of their friends. Years later, Barney goes back to his old ways with women until he receives a surprising set of news. He becomes a father to one of the women he slept with. He changes his ways after having a daughter.

Marshall, Ted’s old college roommate and best friend who married Lily, both come back to New York City two years after Rome. Marshall is a corporate lawyer who hates his job but eventually lands a judicial position in Queens. Marshall and Lily eventually have a third child along the way.

The question of why Ted saved so many memories and spent so much time explaining to his children about how he met their mother still remained. That’s when the biggest twist of the show revealed itself: Ted’s wife was dead by the time the story was being told. However, many viewers probably expected this from recent previous episodes.

“How I Met Your Mother” will be missed because it taught us many life lessons. One of the most important lesson was said by Barney:  “Whatever you do in this life, it’s not legendary, unless your friends are there to see it.”