Jones up to bat for Washburn 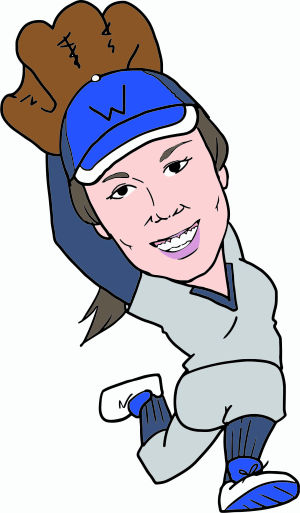 Deidra Jones grew up in the small town Melvern, Kan. Jones’ earliest memory is of her dad hitting baseballs to her brothers, which was the spark she needed to run away with the game. Jones finished last year with a .417 batting average. She has nine home runs and 27 RBI’s this season.

Jones started out playing T-ball and coach-pitch as a young child. It wasn’t until she was nine years old that Jones began playing on a competitive slow pitch team.

Most of the girls she played with then she continued to play with until she was 17. Jones came to Washburn University because she had heard good things about the business programs. She is double majoring in finance and accounting and is expected to graduate this year.

Jones attend Osage City High School, and was part of the league of champions in volleyball, as well as basketball. She found the energy and time to participate in track as well. Jones’ sophomore year she earned three different letters for her excellence in sports.

“I’ll miss softball.” said Jones. “It’s really hard to give up something I’ve done since I was 6. I’ll definitely miss it, but I want to start coaching younger girls, maybe put on a couple of clinics to give back what I’ve learned the past 14 years of my life.”

Jones, is now 20 years old, will be graduating with two degrees this year. Depending on how the Coke internship goes, we may see her back to earn her master degree.