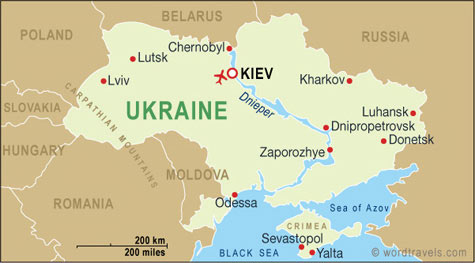 Crimea was a part of Russia but was given to the Ukraine while the two were united by the Soviet Union. Crimea is an semi-autonomous region of Ukraine and is home to a large majority of ethnically Russian Ukrainians.

A referendum was held March 16 to determine the fate of Crimea, a region in Ukraine in the wake of Ukrainian President Viktor Yanukovych’s ousting. About 97 percent of the vote was in favor of integration into the Russian Federation. Crimean Tartars called for a boycott on the referendum. The voter turnout was estimated to be 83 percent.

Following the referendum, Crimea declared its independence from Ukraine. Many were critical of the legitimacy of the voting due to Russia’s presence in Crimea.

“The problem with the referendum was that there was voter intimidation in that there were [allegedly Russian] troops throughout society,” said Linsey Moddelmog, a professor of political science. “That could distort the vote, as well as the minority Tartar population that boycotted the vote, so we don’t really know what the Crimeans really thought.”

The Mejlis of the Crimean Tartar People, an unofficial political association of Tartars, boycotted the referendum and declared it illegitimate. The new Ukrainian government in Kiev announced that they would not recognize the referendum.

All 28 member states of the European Union argued that the separation of Crimea from Ukraine to be a violation of international law. The United Nations Security Council voted 13-1, with China abstaining to condemn the referendum, but Russia vetoed the resolution.

“After the election I read that they voted to get closer to Russia because they were worried about the neo-Nazis and fascists in Kiev,” said Moddelmog. “I wouldn’t declare that group neo-Nazi or fascist in any way, but much more democratic. So I think that it showed evidence of people’s fear being brought up and manipulated on what really was happening, which is typical of Putin Russia.”

The current instability in Ukraine is closely linked to its history. Ukraine was once part of a country that preceded modern Russia called Russ. The capital of Russ was located in Kiev, the capital of modern Ukraine where the coup started.

Later, the capital of Russia was moved toward Moscow and later to St. Petersburg as Russia became an empire. The Crimean region was also home to an ethnic minority of Tartars. During the Soviet era the roots of the crisis started.

“What really makes Ukraine less stable is that political crime that Stalin committed by this agreement with Hitler in 1939 when they annexed and basically divided Europe,” said Dmitri Nizovtsev, professor of economics. “Parts of Western Ukraine were cut off of Hungary or Poland so those parts were always very anti-Soviet and therefore anti-Russian. When Ukraine was a separate and independent state in 1991 it was a whole new dynamic. All of the sudden, that very radical minority had a greater proportion in the Ukrainian population.”

The situation in Crimea was also complicated by Stalin’s deportation of the Crimean Tartars, who he accused of sympathizing with the Nazis. During the Soviet Era, Ukraine was a Soviet Republic.

The situation in Ukraine has been complicated even further as pro-Russian activists gained control of administrative buildings in Donetsk, a large coal-mining city in Eastern Ukraine April 7. Donetsk is heavily populated by ethnically Russian Ukrainians. The pro-Russian activists have declared Donetsk as a sovereign “people’s republic” independent of Kiev.

The Ukrainian authorities reported that in Luhansk, another city in Eastern Ukraine, pro-Russian activists broke into a state security headquarters and raided its arsenal. After the heavily Russian region of Crimea’s separation from the new government in Kiev, concern remains of what will happen in Donetsk and other heavily Russian parts of Eastern Ukraine.

According to Moddelmog, in international politics it is difficult to determine what is justifiable. Russia could be seen as a powerful nation trying to get more power in a region where they have historical maintained influence. She does not think that Russia or the new Ukrainian government want to provoke conflict. She thinks there may be a slow process of Eastern Ukrainian regions joining Russia.