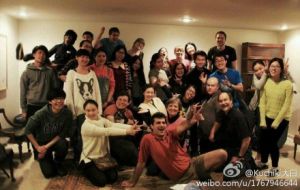 It is primarily for international students to help them learn English and American culture. Usually the Friday nights are used to watch movies and  enjoy snacks and then discuss the movie in English. This past Friday, however, they decided to shift from movie night to game night.

“Our family enjoys games and we have played games with some of the students from time to time,”said McFadden. “These students have expressed that they’d be interested in a game time instead of a movie for variety, so we thought we’d offer a game night.

McFadden said that once or twice a semester they like to do something different than the weekly movie just to mix things up, like a sledding party or something else.

“We’re also looking for creative ways for the students to practice their English and learn some new vocabulary,” said McFadden.

Bikky Sah, a freshman international student from Lithuania, learned about about the activity from an email from McFall. This is her second time joining McFall and his family’s Friday activity.

“I really think this a good idea to have these fun nights. I can learn English here and also American culture here,” said Sah. “It inspires me to learn English better for my future college studies”

“Game night was a little different from the movie night,” said Shuhua Zheng. “I need to take part with other international students. We need talk to each other during the fun game, and I am not nervous to speak at all. Since this was the first time for game night. I like movie night more because it involves more American culture elements.”

McFall said they always have American students to help expose the exchange students to American culture. The movies are played with subtitles and a discussion is held afterward.

“If you’re an international student and you have any interest in participating, let us know and we can keep you informed about what’s going on,” said McFall.