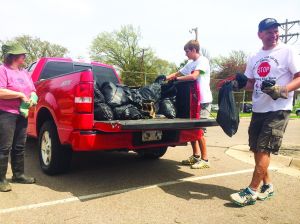 Over 300 volunteers completed more than 1,000 hours of community service during the Big Event at Washburn University, April 26. The volunteers were provided with breakfast, T-shirts, water, lunch and transportation and were sent out all over Topeka to several sites to engage in volunteer work.

Vice President Randy Pembrook spoke to the crowd before it set out and at one point quoted Mahatma Gandhi, who said, “The best way to find yourself is to lose yourself in the service of others.”

Damian Barron, community liaison for WSGA, said he was very enthusiastic about this year’s Big Event.

“We’ve learned a lot over the last two years,” said Barron, a sophomore, undecided. “We are not rejecting anyone not registered that shows up to help.”

The original “Big Event” started at Texas A&M University several years ago. They gathered students and went out in their community engaging in community service.  It started out small before universities began to follow suit. Three years ago, Washburn merged its similar project began back in 1995, “Bods into the Street,” with the “Big Event.”

Shelby Konkel, former WSGA president worked to bring the “Big Event” to Washburn with Rick Ellis, human services director at Washburn, to get the ball rolling. Washburn’s first “Big Event” began in 2011. Over 100 people showed up that year and were sent out to do community service around Topeka.  Since that time, the Big Event has grown each year, and this year was a record year.

“We have the Washburn community coming together to create a powerful impact in our local community,” said Laura Stadler, a WU graduate and employee in human services. It is amazing to see our students putting our school motto ‘Not for ourselves alone’ into action.”

Some volunteers cleaned up the Shunga trail, while others painted stripes in a parking lot or helped with clerical work. There were a variety of jobs at more than 30 different areas around Topeka.