Lockdown with ‘Orange is the New Black’ 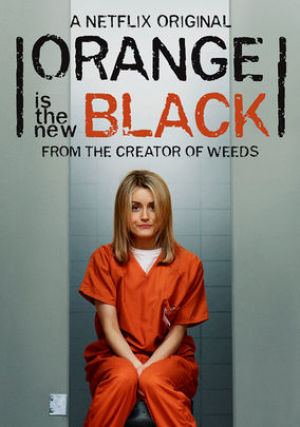 A friend recommended this series to me, saying it was like seeing a train wreck—you can’t look away–and added that he was hooked from the time he saw all the naked “boobies.” too. I was hooked after the first show because this is a well-written, well-acted show. And there aren’t as many uncovered “boobies” after the first show.  That is not to say that you still won’t see some graphic material while watching the rest of the series.

“Orange is the New Black” is about a once bisexual, now hetersexual woman named Piper Chapman, who is convicted for 15 months to a women’s prison ten years after the fact of her crime.  She had carried a suitcase full of drug money to another country for the purchase of drugs for her girlfriend at the time, Alex, who was involved in an international drug cartel.

Piper is engaged to Larry (played by Jason Biggs of Animal House infamy) who first learns of her past when she finds out she is going to prison.  Soon after Piper goes to prison she learns her ex-girlfriend is doing her time there also.  Piper at first avoids Alex, convinced Alex is the person who turned her in and ruining her upper-middle class existence in New York. The backstory of their relationship is explored off and on throughout the series.

On Piper’s first day of incarceration, she manages to insult Red, the prison chef, who decides to starve her out and sees that she receives no food.  No one dares disobey Red’s decision lest they suffer the same fate (Red is played by Kate Mulgrew, most notably known as the captain of the ship on Star Trek Voyager, for any of you Trekkies out there–and you know who you are).  Some of the inmates think up a plan for Piper, who goes through a painstaking and crude process to create something she uses to make amends with Red. Something only prisoners with a lot of time on their hands could think up. But it works. Bad food is better than no food at all.

One of the good things about the show is that you get to see a lot of the characters’ backstories.  For instance Red owned and operated a restaurant with her husband, destroyed a woman’s boob job and got involved with the Russian mob. Alex had an underprivileged childhood and seeks to redeem herself with the loads of cash she got working for the drug syndicate.  You will recognize other faces in the cast and many of their characters have very interesting backstories also.

“Orange” will take up where it left off on June 6 this year.  So if you haven’t seen it yet, you’ve got a little time to catch up before the next season.  Don’t say I didn’t warn you that “Orange” is very addicting.  I watched the whole season over one weekend.  I couldn’t drag myself away. In fact I think I’ll go out and buy the book to tide me over for a while. I can’t wait for June.