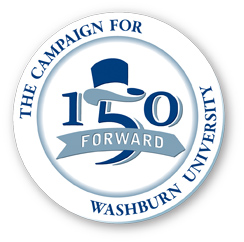 According to a press release sent on April 25, Washburn University recently received a gift of more than $1 million. The gift came from the estate of Mabel Asenath Clem Henderson who passed away in September 2013, in Topeka, Kansas.

Henderson, a native of Corning, Kansas, named Washburn University as a beneficiary in her estate because of her love of education.

Henderson’s nephew, Steve Wesley from Crossville, Tenn. said his aunt and her husband LaVern Henderson valued education and saw it as a way to achieve their dreams.

“This gift to Washburn is their way of helping future students obtain a college education,” said Wesley.

Dr. JuliAnn Mazachek, president of Washburn University Foundation said  the foundation is honored that Washburn was chosen as the recipient of such a generous estate gift.

“Although the Hendersons didn’t attend Washburn, they viewed the university as a community asset, and we are grateful for their support,” Mazachek said. “Following their wishes, this money will be used to provide scholarships for generations of students to come. This is a meaningful, lasting legacy to their lives.”

LaVern and Mabel Henderson, who both grew up in small, rural communities met in 1948 at a YMCA dance in Philadelphia. They married two years later in Baltimore.

Mabel graduated from the former Strickler’s Business College in Topeka. She went on to have successful 35-year career in government service. She moved from the Work Project Administration in Topeka, to the Treasury Department in Washington, D.C., to the Internal Revenue Service in New York City and then on to Philadelphia.

LaVern graduated from Villanova University, Villanova, Pa. During LaVern’s career with the Burroughs Corp., he assembled the computer model that was used to help put John Glenn in space. Over the years he worked for General Electric Aerospace, Support Engineering Group, Diamond Shamrock and a consulting firm in Chardon, Ohio.

In 1991, the couple decided to move back to Topeka to be close to their family.

“Aunt Mabel and Uncle LaVern were very quiet, giving people,” Wesley said. “Their gift to Washburn is a reflection of their belief in education. They knew firsthand that a solid education and a strong work ethic could lead to a meaningful, successful life.”

This gift will endow the LaVern B. and Mabel A. Henderson Scholarship Fund.

For more information about this story or about the Washburn University Foundation visit: www.givetowashburn.org