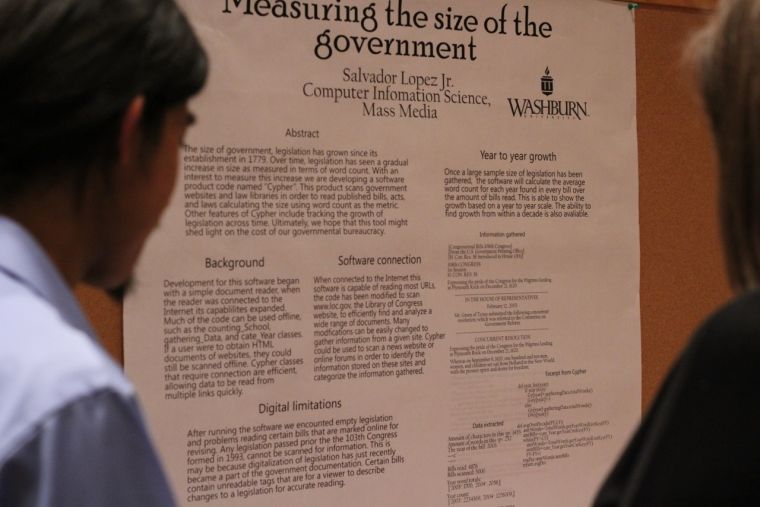 Apeiron participant Salvador Lopez looks at his poster while explaining his research "Measuring the Size of the Government" to members of faculty and the public Friday, April 18.

Bugs was just one of the many subjects included in this year’s Apeiron event held at Washburn University Friday, April 18. Apeiron allowed Washburn students to showcase their research, scholarship and creative activities. Students from all departments were welcome to participate and members of the public were invited to attend the event.

Registration and poster setup began in the Memorial Union at 10:30 a.m. Entries included poster presentations, oral presentations and fine arts presentations. Fine art performances were held at 11:00 a.m. at Carole Chapel and oral performances at 1:00 p.m. at the law school.

The chairman of the Apeiron committee, Shaun Schmidt, welcomed guests at 3 p.m. in Washburn B in the Memorial Union where student designers were also recognized. Each year the creative media practicum class at Washburn designs two posters for the Aperion event. The first poster encourages students to register for the event while the second, which is put up later, provides more information about the event. The Apeiron committee selected Emily Juhnke and Carly Willis as the top two designers this year.

After the welcome and recognition came the “Last Lecture” of the Apeiron event which was presented by Mary “Bugs” McCoy, Professor Emeritus of Biology. McCoy taught for 33 years in the Biology Department at Washburn University. Her presentation “Reflections on My Life among Bugs” provided insight of the bugs she has studied over the years and mentioned her current project ‘The Maligned Species: Memoirs of Multi-legged Creatures.’

From 3:45 p.m. to 5 p.m students from all disciplines presented posters of their research in Memorial Union, Washburn A. Students, faculty, and members of the public walked around to view the various posters and were able to talk to the students about their research.

Senior biology major Cheyenne Bartz was excited to present her research on bugs. Her poster “Influence of Host Selection Behavior on the Spread of the Cowpea Weevil,” explained her research on “choosy” bugs. Bartz and her mentor professor of biology Rodrigo Mercader, researched to find out if there would be a difference in how choosy bugs are if they are raised on different types of food then what they are normally raised on.

Bartz said before participating in Apeiron she never had the experience to do research and actually present it. She recommends other students participate in Apeiron.

“The research was fun and I did get a lot of good information from it. But I think putting together this poster and just the experience… was really nice.” Bartz said. “But getting up and getting everything all together and trying to present it to people, I think it really helped me to understand more what I was doing.”

Salvador Lopez, junior computer science major, who often studies a different kind of “bug,” presented research on a software product code named “Cypher” developed to scan government sites such as the Library of Congress database to gather information about legislation. Based off the legislation he is able to tell how many words are within each bill and from there can gather a total word count for each year or an entire decade. The ultimate goal is that this tool might shed light on the cost of governmental bureaucracy.

Lopez worked on his software program for about four to five months. During this time whenever he tried to talk about his program to others he felt like they just weren’t getting it.

“It was always going over people’s heads,” Lopez said. “But at Apeiron I was able to talk about it and people understood what I was trying to do with the programming. It was cool.”

Although there were a only a few ‘bugs’ to discuss, Apeiron had a plethora of other topics to review. Included were subjects such as grazing goats, vegan eggs in cooking, sleep deprivation, depression among the elderly, foil stamping, ceramics, the sound of clay, athletic performance, the influence of Mozart, abortion in Latin America, the impact of education, choices and making a true difference.

Lopez says that he recommends other students participate in Aperion but they should not expect to turn in just anything. He advises students to realize that the work should be superior to anything they would normally just turn into class.

For a link to the Apeiron 2014 program visit: http://www.washburn.edu/academics/apeiron/previous-apeirons/ApeironProgram_2014.pdf