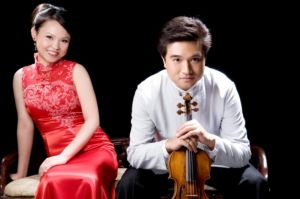 Gary Johnson, the organizer of the event and nine year president of the association, said he was very happy to have Yang and Olivia come and perform here in Topeka as they fit the more classical scheme he had hoped to be the highlight of the season.

“This season we really wanted to bring the concerts back to what they were, a classical base,” Johnson said.

The concert was open and free of charge to Washburn students with an I.D.

“It’s our way to thank Washburn for the use of their campus”  said Johnson.

The concert also marked the end of a long period of office as president of the association for Johnson, who is now turning over the chair to member Debby Packard.

Johnson is also a retired musical therapist and avid musician and has been involved with the association since 2001. He said he really enjoys being a member of the organization.

“It was not until I was encouraged by a friend that I joined, and I have been actively involved for thirteen years now,” Johnson said.

Music is in the background of Johnson who plays both Trombone and guitar, and the ability to work in the community and provide quality entertainment is a great passion of his.

“I grew up in New York, and our town had always had similar concerts,” Johnson said. “So it really is familiar ground to me.”

The opportunity to host Yang and Olivia Liu was a very much appreciated one and really helped to fit the broader scheme wished for by the Association, which at their heart is to be able to provide stellar quality concerts to the people of Topeka.

It was the first time to perform in Topeka for Yang, a violinist of thirty years. He said that this year’s tour had been “just excellent” and that he had anticipated this final season’s concert would be “the best performance.”

The concert can best be summed up in the words of Yang himself who said, “No performance is a small performance, it may be a different place or size but every performance is an event like the only one.”