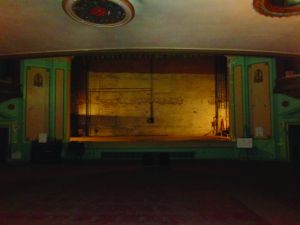 The lack of life in the downtown Topeka area has been an ongoing issue in the city, but on the corner of Eighth and Jackson may sit the real solution to the downtown problem.

From the street entrance, one wouldn’t know that a 1920s era theatre sits in downtown Topeka.  Not only is the Jayhawk Theatre a classic, it is also the State Theatre of Kansas. Beginning with the acquisition of the theatre by Jim Parrish of Parrish Management in 1994, this year begins the second decade of the ongoing journey to restore the Jayhawk to its former glory.

Architecturally, the Jayhawk Theatre is incredibly unique.  It is soundproof because the foundation and support scaffolding of the building is made up of concrete and steel instead of wood, the typical construction material of the era.  The Jayhawk also boasts of a freestanding balcony and fire exits by the front stage, which was innovative.

Because of these modernizations, the Jayhawk Theatre served as the archetype for more than 300 following theatres designed by the Boller Brothers all around the world.

The Jayhawk Theatre board of directors has an incredibly specific plan of what they wish to see at the theatre upon the re-opening.  They plan to show art movies, which one now has to drive to Lawrence to view.  They also have discussed silent movies, film festivals and annual theatrical events.

Additionally, the theatre will be available for rentals for occasions such as formals, weddings and business meetings. The acoustics of the theatre were designed so that one could sit anywhere in the theatre and have the best seat in the house. Because of this, the Jayhawk hopes to have live music performers as well. When the Jayhawk reopens, technological advancements will also allow for performances via satellite.

“The beautiful aspect of this venue is that you can come for a performance, and feel intimate without feeling empty.”

When completed, the Jayhawk will seat 978 people. TPAC seats 2,400 people.

“I think it’s going to be very important [for the Washburn campus] because one of the groups they are eager to reach are college students,” said Kathy Menzie, mass media department chair. “And this is going to be a venue that college students will want to utilize for concerts and movies.”

Menzie is currently teaching public relations II, which is a class that requires students to put together the mass media banquet and do an additional campaign project. The campaign is usually a community group that the class provides a full-scale campaign for. This year, the class is focusing on the Jayhawk Theatre and is doing background research of the theater, comparing competing art organizations and meeting and visiting with board members to find out what they think is an important approach.

The Jayhawk Theatre board of directors spent years polling and surveying all aspects of the Topeka area to discover what Topekans wanted.

“This is Topeka’s theatre project,” said Duncan. “Since its founding, the Jayhawk has always been a community project.”

Especially with the new movement in Topeka to revitalize the downtown area, the Jayhawk may hold the key to the success of the project.  Along with the presence of shops and restaurants, the Jayhawk could serve as the hub for entertainment of all kind, ranging from classic to contemporary.

Yet if the journey to reopen the Jayhawk is so beneficial to the city, why hasn’t the project been completed after 20 years? The theatre suffers from a problem that most Washburn students can identify with – limited funding.

“The Jayhawk Theatre has never had a major donor gift,” Duncan said. “And there is a definite sense of urgency now.”

Just in the past two years, structural damage accrued from the elements has begun to eat away the plaster of the theatre. While the project is only $2 million away from the start of the revitalization, each passing month that construction doesn’t start, the more the budget must be estimated for further damage repairs. The Jayhawk plans to roll out a new fundraising campaign in the next few weeks.

With the theatre sitting a mere six-minute drive away from the Washburn campus, Duncan encourages readers to come see the theatre for themselves. She also encourages students who have a taste for historic preservation and architecture to stop by and mention open spots on the board of directors.

The Jayhawk Theatre and Upstage Art Gallery are open Monday thru Friday 9 a.m. to 5 p.m. Staff members recommend calling the office at 785-233-4295 to stop by after hours or on the weekend for a tour.  The incredible historical details surrounding the theatre provided in the tour would definitely be worth the trip.