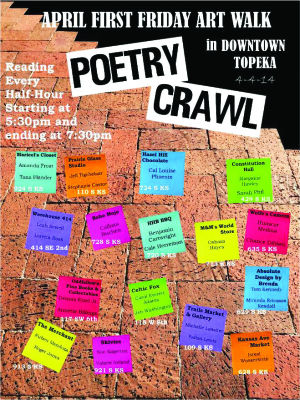 During the April First Friday Art walk April 4, at 16 locations throughout downtown Topeka, 32 poets took turns reciting their work to the public, in what is being called the “Poetry Crawl.”

Crowds of spectators moved up and down Kansas Avenue visiting the participating locations. There were two poets at every location, both seasoned and beginner, presenting their work every half hour as skit poetry.

Directly across the street from the Old Federal Building at Constitution Hall, the Friends of the Free State Capitol offer a history of Topeka and the original state capitol building to visitors during intermissions in the performances of Morgaine Hawley and Sarah Phillips.

The FFSC is trying to educate the public about the group’s intentions to improve the first historic Kansas state capitol building. The group is seeking volunteers to help with the restoration of Constitution Hall.

“I have been writing poetry for years, probably since I was 15,” said Morgaine Hawley, poet. “This is the first time I have ever performed in public. I’m excited.”

According to Hawley, the promotion was put in place as a part of National Poetry Month. The event gave poets a venue in which they could perform their work and raise awareness to the public about the art of poetry and hopefully gain more interest in the craft.

Dennis Etzel Jr., a poet presenting his work at Oddfellow’s Fine Books & Collectables, reached out to the poetry community via Facebook in order to recruit poets for the event. There were flyers posted on the social networking site as well as across the city of Topeka promoting the event.

“I wrote my first poem in the third grade and tried to get it published in a book,” said Sarah Phillips, poet. “Unfortunately it was a fake scheme, but I have been interested in writing poetry ever since.”

Phillips says she found out about the event by seeing a flyer on Facebook marketing the event that was sent out by Etzel. She replied to the flyer and submitted a piece of her work.

“After I submitted my work, I got a reply saying that I would be performing at Constitution Hall,” said Phillips. “I am really nervous, but hopefully this gets easier.”