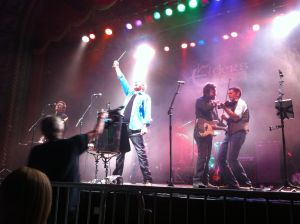 The wildly successful Kansas City-based Irish Band, The Elders, sold out the Uptown Theater in Kansas City for the 12th annual “Hoolie.” The event has become a holiday of its own in Kansas City’s Irish community. “Hoolie” is an Irish term for a gathering. For the Elders and their fans it is a homecoming centered on St. Patrick’s Day weekend.

The Driscoll School of Irish Dance performed first to a mixture of traditional reels and modern Celtic music. The crowd filed in and enjoyed a dinner of corned beef and cabbage. The balcony was filled with rowdy fans and the floor was filled with tables of families who return year after year.

Many consumed Irish beers and Boulevard ales while singing and dancing. The crowd’s energy rose with the sight of the film crews that marked the arrival of the band.

The Elders took the stage to a thunderous welcome. Front-man Ian Byrne addressed the crowd in an Irish brogue. He told the families seated at the tables to understand that the crowds in the balcony were welcome to rush the stage and dance, but suggested the fans in the balcony bring the beer. After 12 years at the same venue the Elders knew their devoted fans well.

The Elders formed in 1998 as a blend of rock and Celtic Folk. Many of the songs are rooted in the spirit and the history of the Irish in America. One of their most beloved songs, “1849” is about the great famine and exodus. As Byrne sang the crowd joined in singing, “They left behind the clans who’d been together a thousand years/The music and the memories ringing in their ears/They brought with them tradition and the will to work and die/In the land known for freedom, soil and sky.” While singing Byrne and the crowd pointed to the ground and the heavens.

The band consists of Byrne on vocals, bodhrán drums and whistle, his son Kian Byrne on Bass and drums, Brent Hoad on the fiddle, keyboards and accordion, Steve Phillips on guitar and mandolin, Norm Dahlor on banjo, bass and guitar and the newest member, Colin Farrell on fiddle and flute.

“It’s a privilege really, [joining the band],” said Farrell. “I used to see them all the time and at different festivals that they are always playing in. I loved the music and they asked me to join them and I said ‘yeah.’ You couldn’t really turn that down.”

During this year’s concert the band debuted a song in memory of Levon Helm. Helm passed away last year and was a founding member of the legendary rock group, The Band. The Band was known for mixing Celtic and Appalachian roots into the blues in the 1960s. The Elders performed the new song in honor of a hero in traditional folk influenced rock and roll music.

“Levon Helm was just an inspiration to us all,” said Byrne. “His passing was a big crush to us all and so we had to write a song in tribute to him.”

he crowd was filled with energy and came together arm in arm during the song, “Appalachian Paddy” to sing, “Put your arms around each other/And sing to the angels up high /Shake your fist at the devil and begrudgers /Give a kiss to the one by your side.” Hoolie veterans were aware of the protocol and knew when to sing, dance and give signs of love and faith to one another.

The show’s climactic finale was a fiddle duel between Hoad and Farrell. Byrne and his son also dueled on drums. Green and gold balloons fell from the ceiling as the crowd roared. Byrne announced that he and several of the others would be waiting in the lobby to greet the fans as they left.

“I think it was the best Hoolie yet,” said Byrne. “It was great. It was a lot of energy and we had a lot of mistakes and they were all good.”

Keeping with a running Hoolie tradition, the Elders proclaimed, “This is absolutely the best crowd we’ve ever had,” said The Elders.

Byrne, his son and Farrell were out in the lobby signing autographs and socializing with a familiar crowd promising to see them next year. The Hoolie is more appropriately comparable to a rowdy clan gathering than a concert.