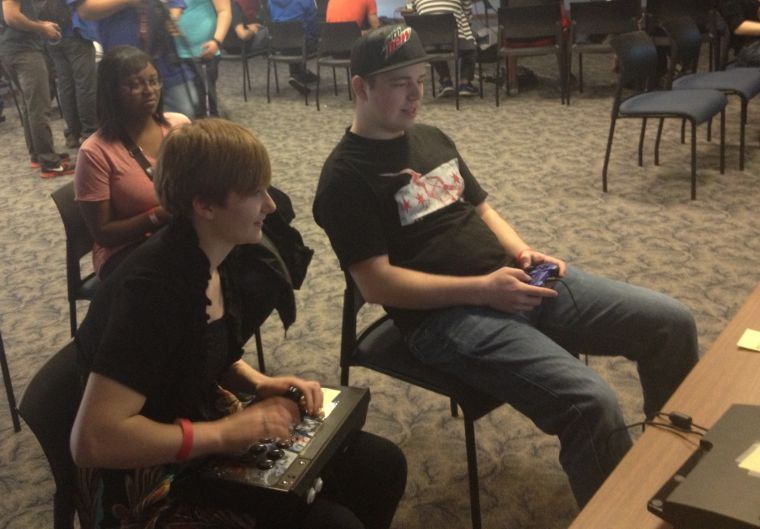 Avauni Morris, Destany Meeks and Tyler Hazelton play a round of Street Fighter X Tekken. Mini-cake Meltdown was open to Washburn students cush as Hazelton, as well as members of the community like Meeks and Morris.

Colton Goeffert, [email protected], is a junior associate of sciences major.
Washburn hold its first ever Minicake Meltdown, an event that hosted a Super Smash Bros. Melee tournament as well as many other fighting games. The event started at 12:30 p.m. March 29 in the Memorial Union’s Kansas Room. The event was open to Washburn students and members of the public alike and was created as a partnership between local game shop, Gamers HQ, Megacake Meltdown, and the Washburn Campus Activities Board.
Games available to be played at the event spanned a variety of consoles and included some old favorites like “X-Men VS Street Fighter” and the previously mentioned “Super Smash Bros. Melee”. Some of the more recent games at Mini-Cake included the typical fighting game standards like “Ultimate Marvel VS Capcom” and “Super Street Fighter IV”. Finally, a few Indie fighting games like “Divekick” and “Skullgirls” were available as well. While only seven gaming stations were set up, participants could choose to play any of the three to four games at that station.
“We wanted to keep [the selection of games] pretty mainstream, as far as what people know, though I think there are a few games in here that aren’t quite as main line,” said Caleb Davis, owner of Gamer’s HQ, “We like to keep it so everyone can feel comfortable playing, we don’t want any real crazy games just yet. Megacake is when we really branch out, we have some real obscure niche ones during that tournament.”
While all these games were available to play, the main draw was the Super Smash Brothers Melee tournament. An entry in this tourney came with the $5 entry fee to the event and the winner of the tourney received the grand prize of a $50 gift card and a two-day pass to compete in Megacake Meltdown 2 which will take place from May 30-31 at Gamers HQ. Second place in the tournament netted one VIP pass for four players at Gamer’s HQ. Door prizes were also handed out in the form of more gift cards. These gift cards were handed out every half hour by CAB staff members who chose a number that would match a number on the wristband participants were given as they entered.
“The whole atmosphere of Megacake is completely in Minicake, so it’s able to be just as big in hype as Megacake with just a smaller audience” said Tyler Hazelton, a first-year Computer Technolgy and Information Services student at Washburn Tech.
Delete Image
Align Left
Align Center
Align Right
Align Left
Align Center
Delete Heading