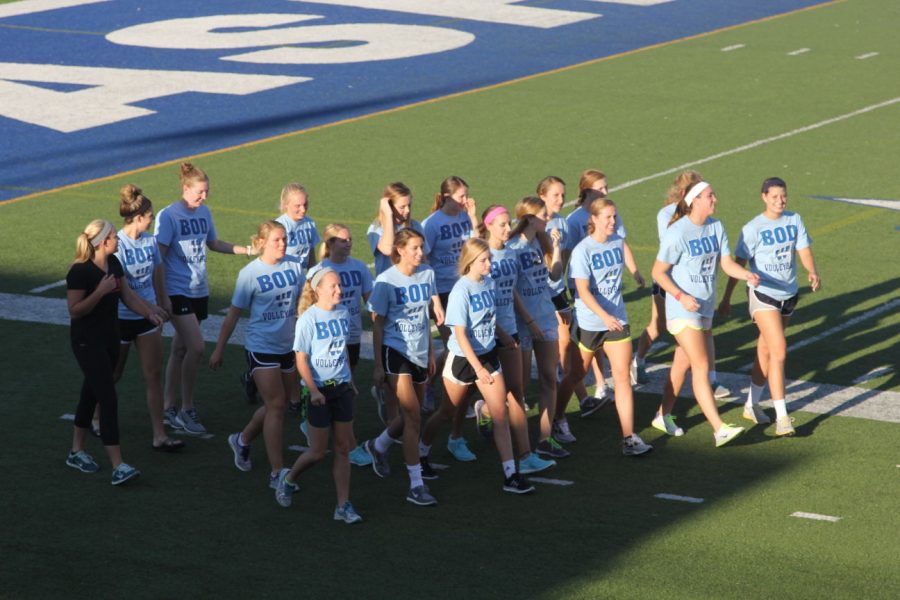 Washburn’s soccer team comes onto the field after being introduced during Traditions Night. All Ichabods can join Washburn athletics for the first home sporting contest Thursday, Sept. 4 when the Ichabod football team takes on Lindenwood University.

“The purpose of traditions night is to acclimate our new student community with some of the traditions surrounding our athletics events,” Mckinlaye Harkavy, director of New Student Orientation, said.

“It was something new, something we hadn’t really been to before…I liked it,” said freshman Dana Kottman, an occupational therapy major.  Coral Steinhoff, another freshman and a kinesiology major, agreed with Kottman’s statement.

“The mic could have been turned up,” was Steinhoff’s only complaint about the event.

Traditions night started with a show by the marching band, drill team, and Dancing Blues, Washburn University’s dance squad.  Following the opening presentation, Brent Hogan, Marketing and Special Event Coordinator for the Washburn Athletics department and emcee for the evening, honored Harkavy for all of her hard work.

“That was not anticipated,” Harkavy laughed as she commented on her honoring at traditions night.

After that, the marching band, drill team, and dance squad did some more routines that they had practiced before being joined by the Washburn University cheer squad, who lead the crowd in some cheers.

This was followed by a talk about all the sports that Washburn University offers and a presentation of the current sports: women’s soccer, coached by Tim Collins; volleyball, coached by Chris Herron; and football, coached by Craig Schurig.  Each of the coaches also shared a little bit about their expectations for the season.

After the introduction of the fall sports, the marching band, drill team, dance squad, and cheer squad came together in front of the bleachers and sang the Alma Mater.

When asked what their favorite part of traditions night was, Kottman replied, “Definitely the singing [of the Alma Mater].”  Steinhoff agreed.

Traditions Night concluded with the option of watching the football team practice under the lights.  In addition to the main event of traditions night, there were free t-shirts, temporary tattoos, and popcorn offered at the gate as people entered.  Harkavy estimates that more than 450 students showed up for the event.

“I was just talking to her about joining [Bod Squad],” Kottman said.