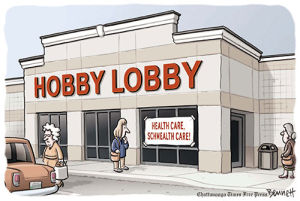 The Supreme Court is hearing a case filed by Hobby Lobby, requesting that they should not be forced to provide insurance plans for their employees, that covers forms of birth control that the company’s leaders object to on religious grounds. Hobby Lobby’s owners are evangelical Christians and object to forms of birth control that are abortive in nature.

The question in the case is if the federal government can mandate that a corporation like Hobby Lobby be required to provide insurance plans to its employees that include access to forms of birth control that the owners find religiously offensive. The other side of the issue is that, if victorious, Hobby Lobby could enforce religious beliefs on their employees and deny health care options to women.

The first problem with Hobby Lobby’s argument is that they wish to decide what options for contraception a female employee should have access to. This is problematic because it is the woman’s health that is of concern and should bet heir choice in what plan they want.

A corporation should not be allowed to make decisions about a woman’s health for her. This lawsuit is aimed at protecting the religious values of the owners, but what about the values of the women who are seeking contraception?

One of the forms of birth control Hobby Lobby does not want to have covered by plans available to their employees is Plan B, also called the “morning after pill.” Hobby Lobby’s owners see this form of birth control as a form of abortion and are morally opposed to it.

Plan B is an option for women who have been sexually assaulted and do not want to become pregnant with the child of their attacker. No individual or company should interfere, for religious reasons or any other reason, in the wishes of a rape survivor. If a woman was sexually assaulted and wanted a pill to prevent a pregnancy she did not consent to, then she should have access through her insurance to that pill if she so chooses.

If Hobby Lobby wins this case it will have consequences that will continue the marginalization of women’s health issues. There are numerous pharmacological applications for birth control pills beyond contraception. Like many drugs that were intended to treat one problem, such medications can treat others. Birth control pills can be used as an effective treatment of ovarian cysts, endometriosis, hormone regulation or even severe acne.

If contraceptives are not covered, then women will not have fair access to pharmaceuticals that treat problems that are unique to women. This would effectively treat some aspects of women’s health as acceptable collateral damage in battle over religious views.

This may not be an immediate threat, but if Hobby Lobby wins to protect their religious views, then a precedent has been set. If a company’s founder objects to blood transfusions or vaccines on religious ground could they opt out of providing plans that cover potentially life saving treatments?

If Hobby Lobby wins this battle and these other treatment, that violate the beliefs of certain faiths, then the United States would be condoning a more widely practiced religion as defendable over another faith or denomination. In addition, it would uphold beliefs that restrict a woman’s right to choose treatments she wants. This reinforces gender inequality.

If Hobby Lobby wins it will be a loss for women. The company’s arguments are based in Christianity, which has caused many to sympathize with their case. The philosophical justification for making a law is preventing harm. The question is, who is the victim in this scenario? The evangelical Christian owners of Hobby Lobby are not the victims in this case; the victims are the women who stand to loose the ability to have a plan that meets their health needs and desires.

The employee is the one who owns the policy and should have control over what they decide to use. Insurance is not divided into parts that already separate birth control from other options. Birth control is an option in an already structured and general plan.

A final concern is that Hobby Lobby has argued that they are a private corporation and should be protected under the First Amendment. This tactic is a smokescreen that is meant to distract from the other issues.