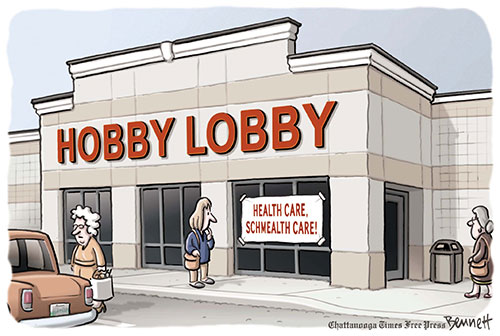 The Supreme Court heard oral arguments in Sebelius v. Hobby Lobby Stores March 25. For those of you who have not paid attention, this case centers around the left’s ongoing attack on religious liberty in every state in the Union. When Obamacare was forced through Congress over the objection of the Republican Party, American’s were outraged.

Their outrage has been justified. Hard working Americans have been tossed off their insurance, lost access to their health providers and now are being forced to purchase health insurance, including abortifacient drugs and medical devices.

Abortifacient medical devices and drugs are at the heart of Sebelius v. Hobby Lobby. As a religious corporation, Hobby Lobby was founded on the principles of the Bible. David and Barbara Green opened Hobby Lobby in 1972 and from its very inception have operated on the moral and ethical teachings of Jesus and church.

The Greens and their company have objected to the requirement that they must provide drugs and medical devices that cause abortions in pregnant women. They believe that every life is sacred and the destruction of an innocent life is immoral.

The Supreme Court has heard the arguments and now they must make their decision based on the “Sherbert Test.” In order for Hobby Lobby to succeed in their lawsuit they must prove the following:

-Whether the person has a claim involving a sincere religious belief, and

-Whether the government action is a substantial burden on the person’s ability to act on that belief.

Hobby Lobby is relying on the Dictionary Act and the Religious Freedom Restoration Act as its evidence that Congress has extended religious liberties to corporations as well as individuals. Under the Dictionary Act, corporations are included as persons unless a specific bill explicitly defines a person as an individual. In the case of the Religious Freedom Restoration Act Congress chose to include corporations when they chose not to redefine a “person” within the text of the law.

Those on the opposite side of the issue have made numerous  claims that Hobby Lobby is only trying to get out of paying for health insurance. The truth is Hobby Lobby only objects to four of the numerous forms of birth control mandated by the Obama administration: Plan B, Ella and two different IUDs.

Hobby Lobby gladly takes responsibility for its employees, and works hard to protect their workers by providing benefits, such as Sundays off to spend time with their families and to keep the Sabbath holy.

Such a deeply religious organization cannot be asked to put aside its religious convictions of protecting the lives of innocent unborn children. Religious liberty is the underpinning of this nation. We cannot afford to allow an overreaching government to erode the religious moral of the nation in favor of the popular moral relativism of the day.