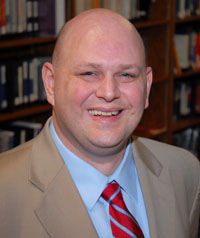 Alan Bearman, dean of libraries, had charges filed against him and Washburn University by a former employee. The two parties reached a settlement March 11.

With the case closed, Canipe feels more comfortable speaking to the Washburn Review. Canipe has read the “Washburn settles Bearman article” that was released in the Washburn Review April 2 and is concerned the issues that led to her constructive discharge are resurfacing.

Canipe detailed the causes of her distress while working at Washburn, but she has now provided evidence that she was not alone in that.

In an 18.5 minute recording of a conversation held in April 2011 between Canipe and former Washburn instructional librarian Keith Rocci, Keith Rocci expressed his feelings about working at Mabee.

“I hate working here, just so you know,” said Rocci. “I hate everything about it. I just can’t find another job. I hate it. I hate coming in here. I mean, it’s the worst place I’ve ever worked in my life, you know?”

Canipe legally recorded numerous conversations with Rocci and other faculty in the time leading up to her resignation, which was officially May 13, 2011. In her resignation letter, Canipe said she was leaving because “[Mabee is] a hostile and unhealthy work environment that has caused me extreme stress, anxiety and depression, for which I’ve had to seek medical treatment during the course of my employment at Washburn….The continued risk to my physical, mental and emotional health leave me no alternative but to resign from this position.”

“I felt compelled to record this [her conversation with Rocci] and other conversations for my own protection. I felt very strongly, and for a long time, that I was being targeted,” said Canipe.

According to Canipe, Sean Bird, current assistant dean of libraries was aware that she had these recordings. Bird has no comment regarding the lawsuit.

Bearman says to the best of his knowledge, there is no difference in the library’s environment between now and how it was around the time Canipe resigned, which was approximately two weeks after the aforementioned conversation with Rocci was taped.

Washburn has given no public statement on whether it has taken any action regarding the lawsuit or the media coverage of the lawsuit.  Canipe is concerned that the faculty and students may still be subjected to situations similar to hers.

However, in a previous conversation, his secretary Rugena Hall did confirm that Farley does read the Washburn Review and that he has read the “Washburn settles Bearman lawsuit” article, which details the concerns of some Mabee employees.

According to Bearman, dean’s council meetings are typically held every Wednesday. In an email Bearman sent to the council members April 11, he attached a communication protocol that he had received at a dean’s meeting April 4. The protocol has since been sent out to the faculty.

The communication protocol, developed after the release of Washburn Review’s coverage of the Bearman settlement and 26 days before the House of Representatives discusses the education budget and funding, is “to ensure the timely and appropriate notification of parties to help ensure that the strategic direction of Washburn University is properly and consistently represented to both our community of learning and the greater public.”

It instructs faculty members to inform Farley and Pembrook and wait for a response before acting in regards to any event involving local or state wide politicians. It also notes “all WUBOR [Washburn University Board of Regents] communication and legislative communication comes from the President’s office/lobbyists.”

If a politician is coming to campus, faculty members are to inform Farley and Pembrook with all details as soon as possible, as well as notify Farley’s secretary Rugena Hall, Pembrook’s secretary Joan Bayens, executive assistant in the president’s office Sue Palmer, director of university relations Dena Anson, special assistant to the president Cynthia Hornberger and John Pinegar and Doug Smith, members of Pinegar Smith & Associates, a public relations agency.

Similar steps are instructed to be taken if a faculty member is asked for a comment, story or meeting by a politician. The protocol also asks that faculty members send an email to Farley’s and Pembrook’s offices and to wait for a response before interacting with politicians’ staff members.

A note was added at the bottom of the document asking that faculty pay particular attention to the county commissioners, the Topeka mayor, the governor and Kansas legislators.

Mabee Library employees received a modified version of the protocol. It is very similar, but it says that communications with Washburn Review reporters prompts an immediate email to the dean (Bearman) who will then contact Farley and Pembrook. It also includes a Mabee Library Social Media Policy.

Because of this protocol, it was difficult to communicate with most faculty. The few who would talk would only do so off-campus or via private email, as one faculty member said the administration has the ability to monitor washburn.edu email accounts. An IT member was unwilling to speak or comment. No Mabee employees would give a statement.

With all 15 counts in Canipe’s lawsuit having been settled, and each count having sought in excess of $75,000, Washburn may have potentially paid over $1.1 million in damages. But according to Canipe, the lawsuit wasn’t about the money.

Canipe says she needed to stand up for herself, that there was a peace from doing so and now wants to help the faculty still at Mabee. She said she speaks out for the students as well. She does not want tuition to go up to compensate because of potential future lawsuits, either after the fact or preemptively.

“[Helping those at Mabee] has always been my focus and was the reason I made the decision to move forward with the complaints and the lawsuit each time I did. I’m glad I did it, but I didn’t make those decisions for myself,” said Canipe. “I did it to stop what happened to me from happening to another person.

“It is my hope that the EEOC, ACRL, Kansas Legislature and other agencies interested in preserving the integrity of the institution will investigate the failings of Washburn’s administration in matters related to my and others’ reports.”

Bearman says he feels he has a good relationship with all Mabee faculty, though.

“We have a staff that’s incredibly focused on student success and they come to work every day and do their jobs. I think the library’s an outstanding place dedicated to student success,” said Bearman.