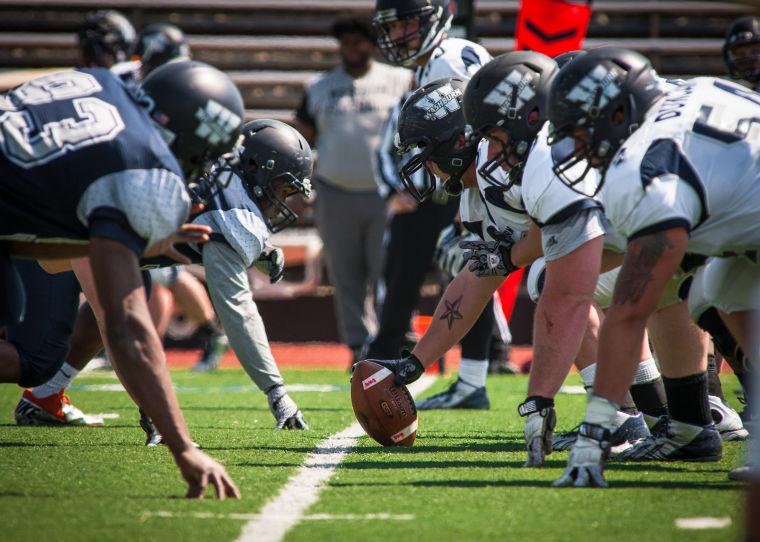 Washburn held its annual blue and white scrimmage game at Yager Stadium Saturday. The Bods have great potential for the upcoming season.

Wasbhurn’s football team held its annual blue and white scrimmage run at Yager Stadium April 5. Held from 11 a.m. to 1 p.m., the Ichabods went through roughly 70 plays as they displayed their talent for the upcoming season.

“We started out very strong, very promising. Due to injuries in key places, we just really did not end very well,” said Drew Egnoske, assistant offensive line coach. “Once we got to the Northwest game we just had a tough time bouncing back. “

The losing streak did not hurt the Ichabod’s total win record, however. The Ichabods ended their 2013-2014 season 7-3 in conference play and 8-3 overall.  After seeing the progress from the spring, Egnoske has high hopes for the next season.

“We’re looking very promising at the offensive side of the ball,” said Egnoske. “We’re really starting to mesh.”

The defensive side of the football team has also seen positive progress through the semester. The team needs to compensate for the loss of key players on the roster. Egnoske believes that progress is arriving at a good pace.

“It’s just about filling in the gaps,” said Egnoske. “On the defensive side we lost some key players but we’re coming along nicely. Defensively we played a lot better than I expected us to.”

The football team’s first game for the upcoming season will be against Lindenwood University Sept. 4.