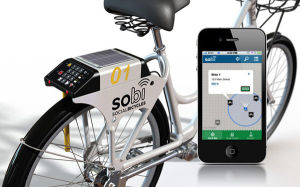 Topeka Metro is helping the city go green, and Washburn University students will have the chance to benefit directly.

Last week, the board members of the Metro agreed to the purchase of 50 So-Bi bikes for a total of $167,625. General Manager of the Topeka Metro, Susan Duffy told the Capital-Journal that the number of available bikes will increase in the future.

“Over the course of two years, I imagine we will move up to 100 bikes,” said Duffy.

The Social Bicycle Company is the first to provide bikes with computers, mobile connectors and GPS systems installed into the bike itself.  Bikes can be unlocked when cyclists use an app on their smartphone, but they can also use the bike’s installed computer to purchase ride time.

Customers don’t have to worry about returning the bike to a store or even a specific parking location. Rather, since the GPS tracker system monitors the locations of bikes available for reservation, the bikes can be left anywhere in the city.

In addition to being convenient, the bike’s computer system allows for the rider to coordinate social media in order to share the bike’s ride route of the day, how many miles were ridden, calories were burned and money that was saved by biking instead of driving.

When the cyclist is finished with the ride, he or she just has to slide the lock over the bike bar, which alerts the system that the bike is now available for the next rider. Customers are charged a fee when the bike is left outside the parameters set by the GPS. There are, however, reimbursement credits available when the cyclists return the bike to an approved docking station. This system guarantees that there is an equal circulation of the bikes throughout the Topeka area.

The board has decided on the preliminary four docking stations for the bikes around the city. These locations will be Topeka and Shawnee County Public Library, Gage Park, Quincy Street Station and Washburn University.

“I don’t see why people, especially students, wouldn’t take advantage of the bike initiative,” said Jenny Ploussard, a Washburn student and marketing coordinator at Topeka Metro. “It is hard to bring a bike to school with you. It’s even harder to find a place to store it where you don’t have to worry about it being stolen or damaged by the elements. With the bike initiative, you would be able to grab a bike whenever you want to get some exercise or run some errands.”

In the 2013-2014 academic year, students and staff of Washburn University and Washburn Tech can take advantage of free rides on the fixed route Metro busses by presenting their school identification

Washburn students can look for the bikes to hit campus soon. The projected date of availability for the bikes is mid-August 2014.