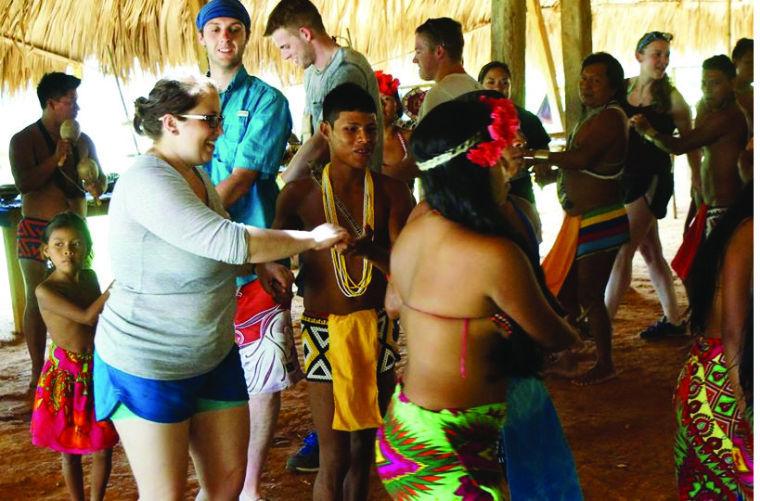 Over spring break Georgina Tenny accompanied 10 Washburn Spanish students to Panama for a life-changing journey. Tenny organized the trip by utilizing Panama’s national website to find a reliable and safe tour agent. The group explored the country, traveling nearly the entire length in one day by train and plane. The first activity the group tackled was a trek up to the highest point in Panama to the volcano Barú.

“I always start off a trip with a physical challenge of some kind because it is a team building exercise.” said Tenny “They go up as individuals but come back down as a cohesive group. They helped one another up the volcano. Kyle held the hands of the girls on the way down because the path was very steep and rocky which made it slippery.”

The group also visited the Panama Canal and toured the museum. The students learned about the history of the canal and experienced the lock system and learned how it works and about its history.

“Concrete had never before been used [for a project of this type] and they made the walls thick because they wanted to ensure it wouldn’t break. They didn’t have any experience, they didn’t know how to strengthen the concrete walls. The new locks they are building will allow larger ships. There are two locks now, Pedro Miguel and Mira Flores,” said Kyle Quiett junior, undecided.

The group spent time touring the La Escuela de Ritmo (the School of Rhythm), and were lucky to hear a concert being performed in the courtyard. The school began in an effort to help underprivileged children stay off the streets. The school has a restaurant that serves to support it.

“We always do some sort of community service on our trips. This time we did service at Casa Hogar, a home for severely traumatized children that have either been abused, neglected, orphaned and/or disabled,” said Tenny.

The group painted an exterior wall for the orphanage and planted a small flower garden. Quiett described the yard as nice with a modern play area much like an elementary school in the U.S.

“The orphanage hit me hard. I was tearing up. There are 90 kids here and only 10 get visitors. It made me sad that so many kids have no one to visit, that all they have is the orphanage,” said Quiett.

The students were so moved at the orphanage that they asked for a list of things the children needed and went shopping for them.

“I was really impressed with my students. They decided on their own to go shopping for the kids,” said Tenny.

The group also spent time with the indigenous tribe Embará. Children from the tribe met the group and took them via canoe to the village where they enjoyed a lunch served by the villagers followed by dancing.

“They live in a national forest but the law doesn’t allow them to hunt or farm so they have turned to tourism as a way to survive. They make arts and crafts and things and sell them to help the tribe survive. Everything sold goes to benefit the tribe,” said Quiett.

The students enjoyed another canoe ride to a waterfall and swimming hole.

“It was the best swim spot; it was really beautiful. It had a waterfall. Panama was very lush and green [but] there was trash everywhere. [The kids] are legally bound to go to school. They speak their native tribal language, French, Spanish and English. They use technology. They have a government and are represented in Panama” said Quiett

It wasn’t all work though; the tour also included a zip line tour at Tree Trek, visiting a shopping district, touring the French architecture of Boquete and we spent a few hours on the beach and in the ocean. They enjoyed delicious food, such as fried plantain called patacones, fried yucca, chicken soup (which was used liberally as a cure-all), beef and empanada de bacado (fish), as well as many different fresh tropical fruits. The explorers also enjoyed spotting wildlife, including monkeys, alligators, iguanas, colorful birds and a school of fish.

The group also had a night out at a club, and time at Fort San Lorenzo.

“The Fort is made of coral so the cannon balls would bounce off. Bricks that were used as ballast in the bottom of ships were used because they were unloaded and replaced with gold that was taken back in its place. This area is very rich in resources,” said Quiett. “People in Panama are so laid back. The area is very diverse, it’s an international hub. There are political flags and giant signs everywhere. Before the trip the goal was just to get through class, but now I am considering a Spanish minor. I’m going back. I’m definitely going to go back. I’m ready to go back.”

Perhaps the most valuable experience the students shared was the discovery of lifelong friendship.

“We formed a bond. We will always keep in touch. We have already gotten together since we got back,” said Quiett.

“The best part [of the experience] was starting the trip with unknown people and arriving back home with friends. That’s what made the trip for me,” said Rachel Benshoff junior, political science major.