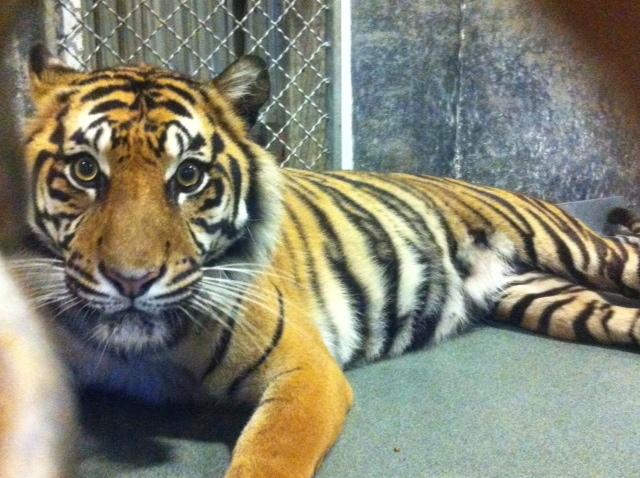 Topeka Zoo Sumatran tiger, named Jingga, is pregnant with three cubs. Jingga is due the first week of May but could deliver this week.

The Topeka Zoo is looking forward to a new arrival soon. Three-year-old Sumatran tiger, named Jingga, is pregnant with three cubs. The staff is excited for the arrival of the cubs, which are expected to come in the first week of May.

Every week Jingga receives an ultrasound to see the progress of the soon to be newborns.

Ultrasounds are performed voluntarily on Jingga, which means that the staff does not put her asleep. Before each ultrasound, Jingga’s keeper Kristyn Hayden-Ortega, has Jingga enter a closed cage. While there, Jingga eats as the staff looks at her cubs on the screen. According to the zoo keepers Jingga feels like she’s getting a belly rub.

For a tiger to do an ultrasound voluntarily is rare. The Topeka Zoo staff are happy to share this fact. Jigga is given the choice to have an ultrasound, if she chooses not to the staff does not force her. So far she has not disagreed to do them.

A tiger’s pregnancy lasts between 104 to 160 days. Due to tigers coming from the wild, little is known about their pregnancy so with this tiger pregnancy the zoo staff is learning a lot.

For instance, the tiger parents must be separated so not to stress the mother. During pregnancy, the mother does not eat more meals, but instead snacks. With her cubs growing she doesn’t have the extra space to eat more. Her food amount will increase after she gives birth. Zoo keepers are learning this and other important facts.

“We are able to track this and have some data” said Lori Tierney, the vet technician.

Within the last few weeks the cubs have been growing so much that the staff can barely get one cub into view where as before they could see all three.

When the cubs arrive they will not be on display for safety reasons. For their first three months the cubs will be alone with their mother learning to walk, climb and getting used to the atmosphere.

The reason why the Topeka Zoo is helping with the breeding of these tigers is because Sumatran tigers are an endangered species.

“We do in depth conservation stuff. If we weren’t doing this my kids wouldn’t see Jingga,” said Simpson.

To assist in preventing Sumatran tigers’ extinction, the Topeka Zoo works with the Species Survival Plan Program. They put together males and females of the same species that have good genetics to help the population grow.

In order to work with the S.S.P., zoos have to be credited by the Association of Zoos and Aquariums. This means the zoo is visited by Directors, Curators and Vets from zoos in the country. These people inspect animal welfare, employee safety, animal conservation, education programs and more. To be AZA credited is an honor because it is considered the top notch in zoo care.

Simpson hopes to make it known to the public that Jingga’s species is endangered.

“She is [like] a spokes person for her wild counterparts. Even in Topeka, Kansas we can bring attention to what’s going on in the wild,” said Simpson.

For more information about the zoo visit http://topekazoo.org.