The Washburn Review • May 1, 2014 • https://washburnreview.org/10166/arts-entertainment/poets-story-brought-to-life-in-new-movie/ 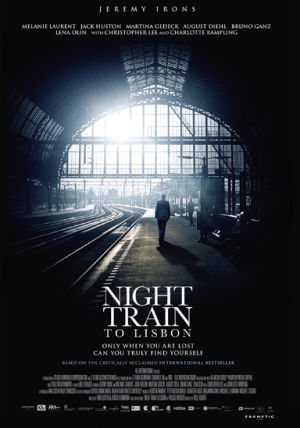 “Night Train to Lisbon” is a movie about a Swiss Professor, Raimund Gregorius who rescues a woman preparing to jump off a bridge. When she runs away and leaves her coat with him, he finds a book and a train ticket to Lisbon in her pocket. Intrigued, he sets out to find the woman and ends up using her ticket on the night train to Lisbon.

In an instant, he goes from a boring, uneventful life to the adventure of a lifetime when he starts reading the book. He finds himself going on an existential odyssey to find the truth about the compelling life and death of a philosophical Portuguese poet who was in the resistance against dictator Antonino Salazar in 1960’s Portugal.

Gregorius realizes that the writings are a door to a universe in which he could have never even dreamed.

“In youth we live as if immortal,” writes the poet Amadeu. “Knowledge of mortality dances around us like a brittle paper ribbon that barely touches our skin. When in life does that change? When does the ribbon tighten until it finally strangles us?”

Gregorius is in the later stages of his own life and what the poet writes intrigues him. Amadeu lives with the knowledge of an aneurism in his brain for many years and actually dies from it on the first day of the Revolution.

This movie is actually a book within a book within a movie, as it takes the audience on a passage through time with Gregorius he tries to unravel the story of the lives of the people interwoven in the life of the poet. He is able to not only come to terms with his own life, but also help those characters in the life of the poet Amadeu who are still living. He brings answers and redemption through tenaciously seeking them out and bringing Amadeu’s stories to life.

The backstory of the dictator Salazar is true: He ruled as dictator longer than any other in Europe. His regime overthrew an elected government in 1926, and in the beginning, he brought economic strength and a collective order to Portugal. To this day, many Portuguese still admire him for keeping the country neutral during World War II.

But his secret police and his shadowy history included torture, especially to those caught in the resistance against him. There was also extensive censorship that stifled traditional Portuguese culture.

Directed by Billie August and starring Jeremy Irons, Charlotte Rampling, Bruno Ganz and Lena Olin, the movie is from the book of the same name. If you are ready for a more cerebral change of pace in the action-adventure genre, see “Night Train to Lisbon,” now streaming on Netflix. This movie deserves three and a half out of five stars.