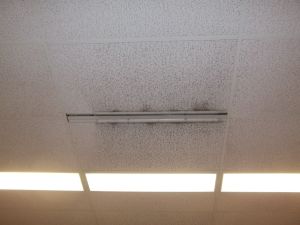 Students that have had a class in Stauffer science hall in the past couple of years might have seen a classroom with ceiling tiles missing. Once a major problem for Washburn facilities was the cooling system would cause condensation to build up and leak through the ceiling, sometimes into the classroom. It was a safety hazard and the noise created by the fans used to provide air into the effected classrooms would drown out the lecturing professor.

It began to be the norm to see the tiles pulled back and for students to have to tolerate the inconveniences of noise and clutter the problem created. But no longer, according to Maintenance Manager Ed Wiss. Washburn has installed a ventilation system known as Aircuity.

It is hoped that this new system will alleviate the moisture problem while cutting down on energy consumption, as well as maintaining clean air in the building. It functions by employing sensors that monitor the air quality and ensure that dangerous chemicals used in the science labs are filtered out. If the system senses certain compounds are present in the room, it will adjust its operation to assist in filtering them out.

In addition to keeping the air safe, the system also monitors the rooms for occupation and adjusts the air flow accordingly. The more bodies in the room, the greater the airflow. It is this component of the system that is believed will stop the troublesome condensation. As for air quality on the rest of the campus, it is not kept to the same standard.

Wiss mentioned these system checks include critical components of the ventilation systems and air filters but do not include vent cleaning.

“Vents are cleaned only if major construction has been done and then an outside company comes in to do that,” said Wiss.

This is also true in the third floor of Maybee Library. There is dirt and dust build up in the system that it is flowing out of the vents and into the tiles. Other locations around campus, such as in Henderson on the first floor near the Honors Department Office also have this problem.