The Washburn Review • May 30, 2014 • https://washburnreview.org/10158/news/washburn-appoints-new-dean-of-college-of-arts-and-sciences/

Washburn appoints new dean of college of arts and sciences 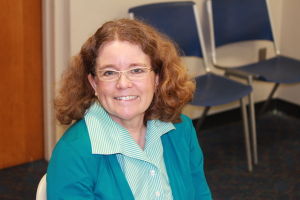 Laura Stephenson was named the permanent dean of the college of arts and sciences May 1. Stephenson had been the interim dean since May 2013.

Stephenson grew up in Colombia, Mo. where her father taught as a professor of agriculture at the University of Missouri. After graduating from high school, Stephenson attended Goucher University in Baltimore, Md. where, according to her profile on Washburn’s website, she obtained her undergraduate degree in psychology. She went on to receive both her master’s and doctorate in psychology from the University of Kansas.

Following the acquisition of her doctorate, Stephenson planned to enter the field of clinical psychology and work at a community mental health center. However, she first took a job in 1985 at Washburn as an assistant professor of psychology. She found that she enjoyed teaching and ended up staying at Washburn where she later became an associate professor and eventually the chair of the psychology department for three years.

Stephenson was named an associate dean of the college of arts and sciences in 2004. She was named interim dean in 2013 following the retirement of the former dean, Gordon McQuere. After an approximately year-long search for an external candidate to take McQuere’e place yielded no results, President Jerry Farley and Randy Pembrook, vice president for academic affairs, appointed Stephenson permanent dean of the college. Stephenson said she was not expecting to be made interim dean when McQuere retired.

Stephenson did not teach classes as interim dean.

The college of arts and sciences is comprised of nineteen diverse departments, ranging from physics to education to theatre. As the dean, the majority of Stephenson’s time is allocated toward working with the faculty of these departments, specifically the chairs. Hiring, evaluating and supporting faculty, developing curricula and managing the college’s budget are some of the duties Stephenson listed that her office fulfills. She noted working with the faculty and department chairs as one of the most enjoyable aspects of her job.

“One of the things that I really like about the dean’s office is that we work as a team here and collaborate with and work closely with the chairs and the faculty,” said Stephenson. “It’s also one of the things I like about working at Washburn. I’ve been here a long time and the thing I like most about it is the students and faculty here. It’s a very nice, friendly place to work.”

As permanent dean, Stephenson continues carrying out responsibilities she had as interim but said she also has to look at the position from a new point of view.

“I think one of the differences between being a dean and an interim dean is there’s more thinking where do you want the college to go and moving forward with ideas and plans, whereas I think as an interim dean there’s more emphasis on just kind of keeping things running,” said Stephenson.

Stephenson says she enjoys being the permanent dean.

Stephenson continues to work with the same members she has the past year as interim dean but wants the university, both faculty and students, to know that she cares about their ideas and what they have to say on making Washburn even better.

“I think one of the challenges of being dean, being new to a position but being old to the institution, if you will, is if sort of trying to look at the university with fresh eyes and saying, ‘OK, what is it; where do we need to be going? What should we be doing that we haven’t been doing?’ And some of that I look to for ideas from faculty and students and staff, so if people do have ideas of things they think we should be doing or any suggestions, I would really like to hear them,” said Stephenson.

The college of arts and sciences office is currently located in Morgan Hall room 253.