The Washburn Review • May 5, 2014 • https://washburnreview.org/10153/news/washburns-brian-thomas-receives-nasa-grant-to-explore-atmospheric-effects-of-supernova/ 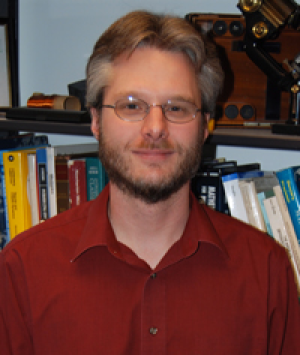 Washburn University’s Brian Thomas, associate professor of physics and astronomy, recently was awarded a NASA grant of $500,000 to study the atmospheric effects of a supernova event close to earth.

Relatively recent analysis of core samples from the ocean floor provide significant evidence that a supernova event occurred 2.5 million years ago close enough to earth to have a significant impact on plant and animal life. In the case of Supernovae, close is considered approximately 30 light years.

That new evidence piqued the interest of NASA in a proposal to investigate the impact on earth of this particular event by Thomas and his colleagues, Adrian Melott from University of Kansas in Lawrence and Andrew Overholt from MidAmerica Nazarene University in Olathe.

“We’ll be working to explain what specifically did happen because of that event,” said Thomas.  “There isn’t a mass extinction at the time, but there are changes in biodiversity. There’s probably a connection.”

For the next three years, Thomas and his collaborators will use computer modeling and existing information from the fossil record and previous research on solar events to understand what likely occurred because of that known Supernova.

Specifically, Thomas will use high powered computer modeling to simulate the effect created by that specific Supernova on the atmospheric conditions of earth. Overholt will investigate the radiation that reached earth and Melott will focus on the properties of the Supernova itself, to ensure the computer models are accurate.

Thomas said this research is particularly important because it is the first time that the entire big picture impact of a Supernova close to earth has been studied.

“We’re going to look at the whole scenario, all together,” he said. “It’s the next step.”

A Supernova occurs when an extremely large star collapses and explodes. In this known case, 2.5 million years ago, the explosion deposited a dust on earth with an Iron-60 isotope. That evidence was discovered in the core sample of the ocean floor.

“Iron-60 isn’t processed near earth,” Thomas said. “The only good explanation for this is a Supernova happened nearby and blew this on us.”

The team hopes to gain understanding of how often Supernovae events occur in this proximity to earth. Understanding that may help explain mysterious extinctions and other unexplained events in the history of animal and plant life on the planet. Thomas said actual prediction of an event like this isn’t going to reach the accuracy of tornado warnings, for example, but should improve.

Washburn physics and astronomy students will be able to participate in the project as well, Thomas said. The team hopes to share its findings at the conclusion of the grant through journal articles.

Thomas and Mellot have collaborated on previous research related to major solar events, including Gamma Ray Bursts and coronal mass ejection. Thomas has been featured on The Weather Channel and public television in Japan as an expert on potentially catastrophic solar events.