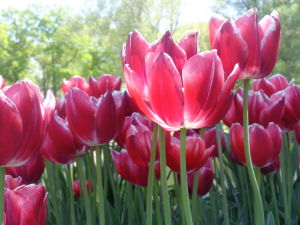 April showers certainly brought May flowers in Topeka. The sixth annual Tulip Time brought blooms to the capital city. Due to the inconsistent temperatures and brutal winter, the running dates for the tulip festival in the Midwest have proved a challenge to predict. Typical tulip blooming time varies as well, but can generally be expected between early April and late May.

During the Tulip Time festival more than 100,000 tulips were seen at three locations across Topeka. Ted Ensley Gardens at Lake Shawnee, S.E. 37th and West Edge Road; Doran Rock Garden at Gage Park, 601 S.W. Gage Blvd.; and the Botanical Garden at Old Prairie Town at Ward-Meade Historic Site, 124 N.W. Fillmore were the locations for the blooms.

The history surrounding T-Town tulips goes back more than a quarter of a century. In the 1970s, Nortonville native Jerold Binkley and his wife took a tour of the Butchart gardens in British Columbia, Canada while on a vacation. Inspired by the color and beauty, Binkley returned home and transformed his rock strewn yard into a botanical wonder.

Binkely’s daughter, Sherry Clayton, wrote that Mr. Binkley has “thoroughly enjoyed watching the transformation of his plain, rocky yard into a burst of color, fragrance, and tranquil sounds by visiting birds as well as the people who have admired his gardens from across town and across the country over the years.”

It has only been five years since the sponsored event of Tulip Time was transferred into the supervision and administration of the city of Topeka and Shawnee County. The multiple locations of Tulip Time is also a new addition, as the show was previously solely hosted at the Binkley residence.