The Washburn Review • May 1, 2014 • https://washburnreview.org/10136/news/mass-media-departments-ends-semester-with-banquet/ 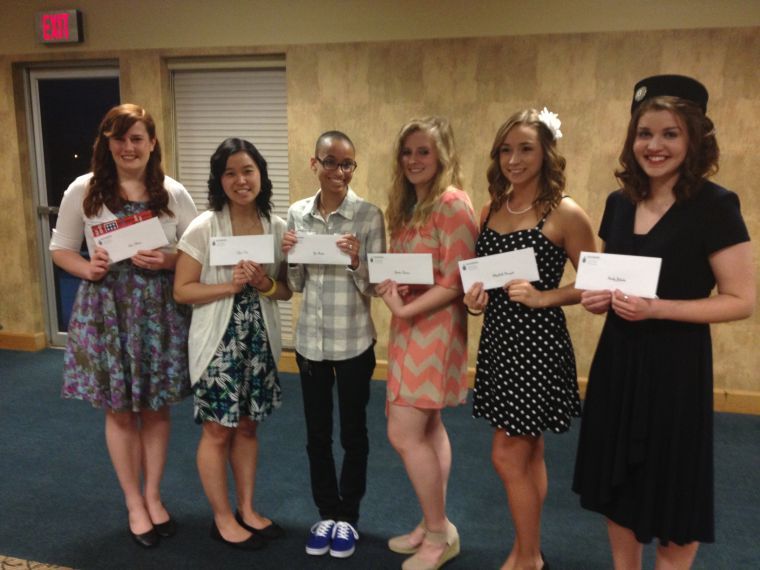 Student posing with scholarships they were awarded with during the mass media banquet.

On Thursday, April 17, the Memorial Union’s Washburn Room was full of  Mass Media students and professors gathered for the annual mass media banquet also known this year as the Swingin’ Media Soirée. The festivities kicked off at 6:30 PM and ran until 8:30 PM. The event was hosted by the Public Relations II class.

The event started with a salad and live music from the Topeka High School Jazz Band who adhered to the evening’s 1940s theme by playing songs like Glenn Miller’s “In The Mood” and Louis Prima’s “Sing, Sing, Sing.” After the crowd socialized for a bit, dinner was served and the presentations began. The dinner, provided by Chartwells, was ham with green beans and macaroni and cheese.

The first presentation was a small preview of a film documentary about sea turtle rescue that Washburn mass media students Mike Goehring and Linzi Fusco shot in South Padre Island, Tex. over the course of spring break.

After the preview, Shaylyn Murphy, a former Washburn mass media student and current communications and marketing director for Visit Topeka, took the stage. Murphy gave a speech about getting and keeping a job in the mass media market.

Tips Murphy gave included “make your boss look good,” “prepare for interviews,” and “being a team player”. After Murphy returned to her seat the first round of door-prizes were given away before recognizing graduating students. After Murphy’s speech the program alternated between door prizes and student recognitions.

After a dessert of apple pie and one more round of door prizes it was time for the evening’s festivities to end. Murphy shared a sentiment with the rest of the particpants that the evening was well spent.

“I thought the class did a wonderful job with the theme, the music was good, the food was great, and it’s always exciting to see students get recognized for their hard work,” said Murphy.