Why you should watch the NHL playoffs 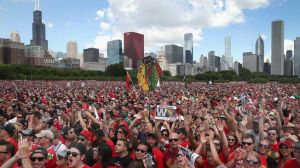 I understand that this is Kansas, not Canada, and that many of you don’t pay much attention to the National Hockey League. I am aware that it may not be a sport you are familiar with and that you don’t care about the Stanley Cup, the playoffs or the history of the game, but you should. Playoff season is in motion and I strongly encourage you to give the NHL the attention it deserves.

My plea is simple: If you like sports, try hockey. It takes some getting used to at first because it is faster paced than football or baseball, but it gets easier as you watch. The rules are simple to learn. Once you brush up on the core concepts enough to understand what is going on, it is hard not to develop a passion for it.

My first argument is that hockey is a most impressive sport. Anyone who has ever been iceskating for the first time should understand that one does not simply master the ice. Unlike walking, iceskating is not something we all grow up doing everyday. When you are out on the ice, it’s like you are flying and requires the grace and care of ballet. Grace is a major part of hockey, but the players have to be tougher than most.

If you don’t already recognize that hockey is probably the roughest sport, look at Patrice Bergeron, a center for the Boston Bruins. Last year, Bergeron finished the sixth game in a series while playing with broken ribs, a separated shoulder, torn cartilage and muscle tissue and a punctured lung. After the game, he shook the hands of the players that dealt the damage.

If the raw power and intense excitement of the game doesn’t do it for you, then you might appreciate the rich traditions and history that make hockey great. The Stanley Cup was first awarded in 1893 and has been passed by each of the winners.

The team that wins has the names of the players, coaches and others who helped with the victory engraved on the cup that grows in size over the years. For any player, having your name forever a part of an award shared by Bobby Orr is better than any other honor. Unlike the FIFA World Cup or the Vince Lombardi Trophy, you can drink champagne or scotch out of the Stanley Cup, which makes it objectively more fun to receive.

Another tradition associated with the Stanley Cup is the playoffs beard. When you are in the playoffs it is bad luck to shave. The length of their beards’ growth distinguishes the victorious players.

The most important thing for me about the Stanley Cup and the NHL playoffs is that it represents a connection between the United States and Canada. The NHL started with a balanced set of teams from both nations. It may be the national sport of Canada, but the United States has its own connection of the league.

In summation, my argument is that if you enjoy sports you shouldn’t forget about hockey. I am not trying to say that it should be your favorite sport or that any one sport is the greatest. I just find it strange that so many people in Kansas don’t care about the sport as much. I present my argument for you to consider watching hockey and seeing what you might be missing.