The Washburn Review • May 1, 2014 • https://washburnreview.org/10113/sports/former-ichabod-brings-professional-experience/ 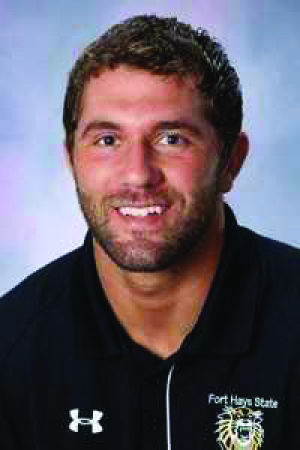 By the end of Zach Watkins’ senior year of high school with a mediocre senior season and no school offering him a scholarship, the light at the end of the tunnel started to fade, seeming hopeless and out of sight.

“The recruiting process for me was nonexistent. I didn’t know if I wanted to go to college or play football, but coming here was the best decision I’ve made,” said Watkins, who later committed to Washburn as a walk-on athlete in April 2006.

Watkins emerged as a stellar athlete when he stepped on the stomping grounds at Washburn, elevating his game to the next level by always being a step ahead to put himself in a position to dominate every snap.

“From my very first snap, I was a walk-on here. I didn’t have a scholarship and ended up earning one. As a freshman, I started taking notes every night in meetings and writing stuff down trying to learn as much as possible. That really helped me start as a freshman and for all four years, knowing what my job was and what everybody else’s was,” said Watkins.

Knowing what everyone’s assignment was on the field led the 6-foot, 220 pound linebacker to become a starter and one of Washburn’s finest players to ever play in the linebacker position.

Watkins was awarded a three-time All-American while at Washburn. After his freshman year in 2007 where he led the Ichabods to their second playoff run in Division II. By his senior year, he was honored by the American Football Coaches Association in 2009, and a second team selection by Daktronics.

Watkins not only displayed a stellar performance on the field, but he was a MIAA Scholar Athlete, earning his degree in business finance from Washburn in 2009 and his master’s in sports administration from Fort Hays in 2013. After his senior year, Watkins was invited to the Minnesota Vikings mini-camp. Before coaching, Watkins helped team USA defend its world title against Canada in the World Championship game for the gold medal in summer 2011.

Prior to coaching at Washburn, Watkins was an assistant defensive lineman coach for three years at Fort Hays, and then coached one season as a G.A. assistant at Northwest Missouri.

Now, Watkins returns back to his alma mater to help the Ichabods refuel the flame of playoff berth by coaching the safeties. Watkins has impacted the weight training program this spring by adding conditioning before and after the lifting circuits to help players improve strength and mental toughness to the program.

“It’s been great coming back  and being around the diverse coaching staff. It’s been good to be on the other side of it, from playing to coaching, learning how to approach practicing and staff meetings,” said Watkins.

Watkins’ “sense of urgency” coaching style brings youth and knowledge to the program and being among the youngest coaches makes it easy for players to relate to him.

“He doesn’t play around. He’s always looking for ways to keep us ahead of the game,” said Hyme Myers, starting safety.

On the other hand, Watkins likes golfing and exercising outside of football. He loves competing still, even though he doesn’t play the game anymore, and staying active helps him be competitive.

“Make sure you do things right, and believe in yourself and if you do so your dreams will catch themselves,” said Watkins.