The Washburn Review • May 1, 2014 • https://washburnreview.org/10107/sports/bods-compete-in-tournament-ending-season/ 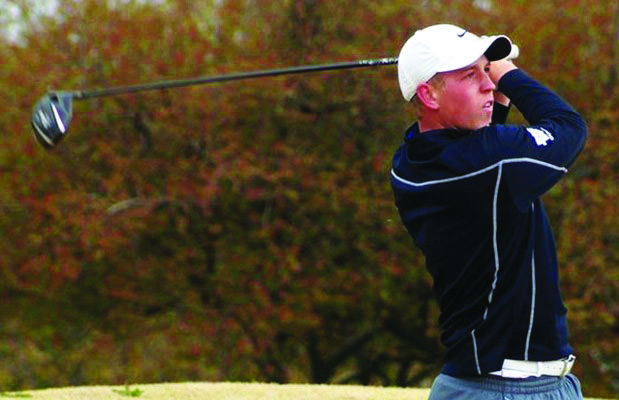 Washburn’s men’s golf team ended the season tied for fifth out of 12 teams at the MIAA Championship Tournament April 23 in Lawrence, Kan.

The Bods had a rough start this season, having a young team with only two upperclassmen. They finished 10th out of 13 teams at their first invitational last fall. Moving forward, the team placed third out of 20 teams during the Heart of America Invitational Oct. 8 in Warrensburg, Mo. The Bods ended their fall season in last place at the Otter Invitational that took place Oct. 20 through Oct. 22 in Monterey Bay, Calif.

“It was a lot of up and down,” said Jeff Stromgren, head coach. “Our young kids got better as the season went on. Our scoring average lowered the last two tournaments and they got a lot of valuable experience throughout the year that will carry over to the next season.”

During the spring season, the Bods placed 11th out of 15 teams at the Capitol Plaza Invitational that took place March 17 and March 18 in Topeka. At the Lindenwood Invitational, they placed third out of nine teams April 14 and April 15 in St. Charles, Mo. It was their last competition before the MIAA Tournament.

“The spring season was tough because of the weather,” said Stromgren. “It was really hard to get into a flow but every team was in the same situation. We continue to improve and the kids will have to make strides during the summer to continue to improve to carry over to the fall season.”

The Bods competed in the MIAA Tournament last Wednesday. Central Missouri won first place by 16 shots over Northeastern State, who placed second. Lincoln and Central Oklahoma tied for third with a score of 902. Lindenwood tied with Washburn with a total team score of 905.

Ronnie McHenry helped lead the Bods with a total score of 220 for 54 holes giving him a sixth-place player finish. They must now wait until the NCAA announcement on team and individuals who will be selected to compete at the Super Regional May 5 through May 7 in Eureka, Mo.

“With the few new recruits we’ve added and the valuable experience our young players got this season, I feel very strongly [that] we can compete for conference championship next year,” said Stromgren. “We continue to improve.”