The Washburn Review • May 1, 2014 • https://washburnreview.org/10085/features/storm-front-puts-new-spin-on-modern-day-wizardry/ 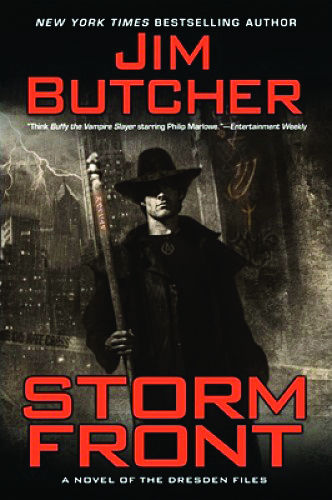 In Jim Butcher’s book, “Storm Front,” Harry Dresden is a professional wizard and P.I. in modern Chicago. “Storm Front” is the first in a series of books titled, “The Dresden Files.” The series currently consists of 15 books, beginning with “Storm Front” which was published in 2000.

Harry Blackstone Copperfield Dresden is a professional wizard and private investigator in modern-day Chicago, where the criminal underworld isn’t just the mob, but also vampires and demons and their ilk. If I haven’t sold you on the concept of “The Dresden Files” with that concept alone, then feel free to move on.

The concept sounds like a lot to take in, but it’s very well- executed. The first book, “Storm Front,” sets up the world of Harry Dresden, the only openly practicing wizard in America.

It starts with Dresden finding out that someone in the Chicago area is also practicing magic, and not the good kind, either. They’re using black magic to kill people by ripping their hearts from their chests.

Things go from bad to worse when the White Council, the high council of wizards, suspects  Dresden is the one using this black magic. Dresden sets out to find this sorcerer and put a stop to his or her thaumaturgy, as he’s already on his third strike, with the Council, not to mention the fact he’s been contracted as an adviser on magical crimes to the Chicago police department.

The one friend Harry has on the force that takes him seriously is Karrin Murphy, head of Chicago PD’s special investigations. Murphy and her team tackle supernatural problems but often have to call Dresden in for knowledge and/or backup.

Dresden is a tall, lanky, smart-talking wizard, while Murphy is a short, stocky,  no-nonsense beat cop with experience in firearms and akido. They play off each other wonderfully and their friendship really builds over the series.

One of the best parts of “Storm Front” and the rest of “The Dresden Files” is how well established the magic aspect is. There’s an art to it, unlike something like “Harry Potter,” where it’s a swish of a wand and a shout of a magic word and off you go. In the world of Harry Dresden, magic has weight, it has a cost. It’s triggered by emotion and conscious thought, an exertion of one’s will. If Dresden gets too trigger happy with his blasting rod (not a wand) he starts to show signs of physical exhaustion; it’s not a free pass to solving all conflict.

As he’s brewing this potion, he gets the recipe from my personally favorite character, Bob the Skull, an intellect spirit bound to a human skull and subject to the wishes of its owner. Bob is a sarcastic, smarmy old soul that has “lived” for thousands of years and isn’t afraid to crack a joke at Dresden’s expense. Even when a character isn’t human, they still have that semblance of the human condition to them.

All in all, “Storm Front” is well worth a read. The plot is good, the characters are great, the world is well-developed and the drama is palpable. If you’re looking for a good murder mystery, a good fantasy novel or both, this is the book for you. I loved it so much I’m already on book five of the series after just a month.