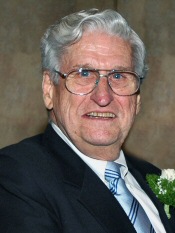 When former congressman Dr. Bill Roy Sr. passed away at 88 years old on Memorial Day this year, Washburn University lost a loyal alumnus, a good friend and a humanitarian. Roy attributed his good works to his wife, who passed away three years ago.

After Roy finished his stint in the Air Force in the 1950’s, he received his medical degree from Northwestern University Medical School in Chicago. Soon afterward, he and his wife Jane moved to Topeka. Roy decided to go into obstetrics and gynecology, because he believed it was the happiest specialty in medicine.

“He slapped more than 8,000 baby bottoms in his career as a doctor,” said Bob Beatty, political science professor. “So I guess there are a lot of [Topeka] citizens who have had their bottoms slapped by Bill Roy.”

Roy practiced medicine in Kansas from 1955 through 1989 even after receiving his law degree. He was conflicted with the Vietnam war and troubled about civil rights. He switched parties and became a democrat, challenging a three-term Republican incumbent in the 2nd Congressional district in Kansas, and won, serving two terms. While in office he wrote legislation that passed, which increased the number of staff and services in health care and emergency services. Many of his works were enacted into law for the greater benefit of Kansans.

Roy has also had children and grandchildren pass through the halls of Washburn University. He has served on the Washburn Board of Regents and the list is large of all the boards on which Roy has served.

“He was a great fellow, a very positive sort of guy who fought for comprehensive healthcare while in congress,” said Beatty. “He worked on it for several years and was deeply disappointed and quite distressed when he couldn’t make it happen.”

It was not a popular subject among his fellow Kansans.

Roy was a visiting professor in Beatty’s department and donated many hours of his time to the students and staff.

“Bill was a real asset to our department,“ said Beatty. He was a friend and a colleague. He developed a scholarship for political science students a few years ago.”

The scholarship is in his wife’s name and is for women interested in getting into politics. It has helped many students intern at the legislature. In the early 1970’s Roy and his wife Jane received their degrees from the Washburn School of Law and were always active in the community. Roy was elected for congress two times, serving two terms in the House of Representatives. He also co-authored the Clean Air Act. He unsuccessfully ran for the Senate two times, the first time against Bob Dole, who beat him by a slim margin.

About 10 years ago, Beatty and department head Mark Peterson sat down with Roy to come up with ideas on how he could help the department. Roy did not want to do typical lectures and came up with an unusual plan.

In his american government class, Beatty said Roy would meet with each student individually for an hour to allow the students to ask questions and gain knowledge through his expertise on policy and other issues. The students quickly found that Roy was interviewing them, getting to know them and placing their questions into a context and framework that meant the most for each student. He was a mentor to many of the students.

Roy voluntarily worked for 10 years with the students, some who were disconcerted at his unconventional approach to learning.

“I feel honored to have met with Dr. Roy, given his vast experiences and limitless supply of knowledge,” said Kristina Sink, former student of Roy’s. “It always means a lot to me when people who have reached myriad plateaus continue to spend time with others in a nurturing way.”

In 2008 Washburn presented him with one of his two honorary doctorates. An honorary doctorate is the highest recognition WU can bestow. They are given to persons who have excelled in their life’s work, with high standards and commitment to scholarship through service and distinction in their endeavors to the university or in other areas directly or indirectly. It is awarded to someone who serves as a model of excellence to others.

After retirement Roy began writing columns for the Topeka Capital-Journal. Fred Johnson, the Capital-Journal’s opinion page editor said that though many did not agree with his liberal politics, they respected him because of his knowledge in medicine and law.

“What struck me about him,” said Mark Peterson, chair of the political science department at WU, “is that he was one of the most upbeat individuals I’ve ever met. Despite his personal politics, he was a solid, humane and liberal, individual and that is hard to do in a state as conservative as Kansas.