Understanding the process of becoming a U.S. citizen 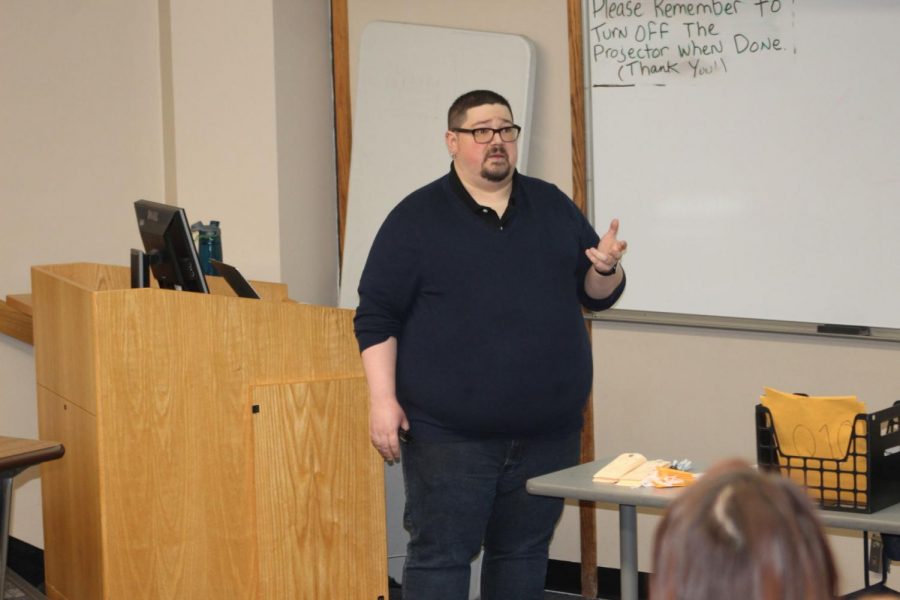 Understand the rules: Jason Miller explains the long immigration process. This was one of many immigration lectures that will be offered this semester in honor of WUmester.

Jason Miller, Assistant Professor of Sociology/Anthropology, gave a lecture about the steps it takes to become an American citizen Feb. 7 in Henderson 103. Going along with the WUmester theme this semester, this is one of many lectures about citizenship that Washburn University will hold.

Miller explained that an immigrant visa, student visa, seasonal worker visa, professional athlete visa, and some others are offered. The only way an immigrant can get their green card is through the immigrant visa path. There is a preconceived notion that if you marry a US citizen you automatically become a citizen, but that is not the case. You still have to go through the naturalization process, but marrying a citizen does have the benefit of cutting time off of the process. Another way to speed up the naturalization process is by serving in the military for a year. It will cut some time off as well.

When it comes to receiving your visa, there are multiple types of visas one could acquire. The most popular is a family based visa, which involves a family member who already has their green card. Next is an employment visa, in which the employer becomes a sponsor through the whole process. There is also a lottery visa, which is exactly like it sounds. If you know how the lottery works, you know the odds of winning the lottery. Another form of immigration is coming over as a refugee or an asylum seeker. Asylum seekers and refugees must prove to the Department of Homeland Security that they have a well-founded fear of persecution. Lastly, you can get a visa if you are a victim of human trafficking or domestic violence. This falls under an asylum seeker visa. Both the refugee and asylum seeker visas are free.

There are many lines to get into when you are applying for a visa. These lines have many hoops to jump through. The longest a person has been in a line to receive a visa is since 1996. It is easy to get cut from one of the lines. If you can’t get someone to sponsor you, then it is a dead end.

Once you get your green card, you can continue the naturalization process by being 18 years old, being a permanent resident for at least five years, having a good moral character, and having a basic knowledge of U.S. civics. The quiz is 10 random questions out of 100, and you have to get 6 correct to pass. Miller offered the quiz to the room and everyone was having trouble, even the professors.

“It doesn’t necessarily surprise me [that the students in his immigration class fail],” said Miller. “I think the questions are oddly specific.”

There are many gray areas in the immigration process leaves wiggle room for officials to make certain rules as they go along.

“I think they leave the gray areas on purpose,” said professor Miquel Gonzalez-Abellas. “So, depending where the wind blows, they can actually make one color or another.”

The immigration process takes over an estimated 20 years. There is no shortcut or easy way to do it. It can be a long, hard process that is confusing even to some U.S. citizens.