Fireworks, festivities and food in store for Fourth of July celebrations in Topeka 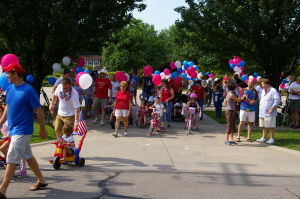 It will be liberty and fun for all on the Fourth of July in Topeka, Kan. There are many events for Topeka and Shawnee County residents to consider when planning their night under the lights.

One of the most attended Topeka and Shawnee County Fourth of July events is the Spirit of Kansas at Lake Shawnee. The festival is scheduled July 4 from 8 a.m. to 10:30 p.m., with activities ranging from live Blues bands to a water ski show.

Bands such as Hamilton Loomis, Anthony Gomes, The 44′s, Randy Oxford, Old No. 5′s, Slow Ya Roll and Dave Bostwick will be playing at the Reynold’s Lodge at the lake from noon to 9 p.m. on the fourth. Blues music has been a part of the celebration since 2010.

The Topeka Blues Society invites participants down to the lake, saying, “bring your own cooler and some dancin’ shoes, and celebrate the USA’s independence.”

Also available during the Spirit of Kansas celebration is a golf tournament at Lake Shawnee Golf Course, a classic car and motorcycle show, a water ski showcase on the lake, and homemade crafts. The evening finishes with a firework display that is sponsored by Capitol Federal. Admission to the Spirit of Kansas is free.

Closer to Washburn and in the neighborhood of many students is the annual College Hill Parade. The parade takes place from 10 a.m. to 11 a.m. on the morning of the fourth. The starting location of the parade is Boswell Square Park at 13th and Jewell. The parade is free and open to the public.

Participants are encouraged to walk in the parade and compete for prizes such as best pet costume, best adult costume, best float and many more.  Also performing at the parade is the College Hill Band, which always welcomes new members and will practice at at 9 a.m. on the fourth at 1334 Boswell Ave.

Following the parade is a hotdog lunch in the park, sponsored by Westminster Presbyterian Church.

A final event to consider when planning for the holiday is the Fourth of July street dance and parade in downtown Topeka. This event spans two days.  The street dance occurs July 3 from 7 p.m. to 11 p.m. The parade takes place the following day, which runs from 9 a.m. to 11 a.m. Both events take place on SW Third Street.

Between parades and fireworks, Topeka offers many opportunities to celebrate Independence Day in the capital city.