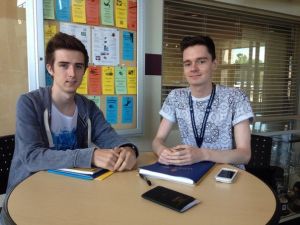 All the way from the temperate lands of a once sovereign state, washed by the Atlantic Ocean, North and Irish seas, occupying the north island of Great Britain and bordered by England, Scottish exchange students Craig Horne, 21, and Alastair Blue, 21, were interested in sharing their Midwestern experience with the Washburn Review.

In order to get as much understanding of how Kansas might have been perceived by these extraordinary people, let’s travel overseas and explore Scotland with its historic castles, beautiful lochs and traditional Highland games.

The written protohistory of Scotland begins with the arrival of the Roman Empire and its influence after the defeat of Caledonians, the most powerful tribe among Picts that inhabited what is now called England and Wales. The history continues with the acknowledgement of St. Ninian, who quite successfully preached Christianity, and the withdrawal of Roman army units from Britain in the year of 410.

The privilege of being the most autonomous country in the UK, the state church, and the parliament, a unicameral legislature of Scotland that emerged in the 13th century, were all recently restored in 1999 after being suppressed by the UK Parliament for more than two centuries following the union of England and Scotland into a single kingdom.

From there to here

Today, a dozen students from the University of the West of Scotland have gone through an exchange program here at Washburn. For a period of two weeks, they have been grinding away learning about the American criminal justice system.

“During this past two weeks we’ve studied about the U.S. government, the juveniles and the American prisons,” said Horne.

All of the students are studying policing at UWS in Hamilton, Scotland.  The tours to the Shawnee County Law Enforcement Center and coroner’s office, the Topeka Correctional Facility, the Kansas Capitol, state courts, and the Shawnee County Jail have been just the right places to familiarize the students with the U.S. criminal justice system and has given them unique experiences that they will carry back home.

“[The] exchange program is a really great opportunity,” said Blue.

They also have shared many interesting differences in the educational system between the U.S. and Scotland. First of all, in Scotland, school is free for all citizens up until they graduate with a bachelor’s degree.  Second of all, a student’s field of study does not necessarily determine the future job of that person.

“I want to become a marketing manager,” said Horne. “As long as we graduate with a hard major we can get any kind of job.”

For an American, this might sound shocking, but the statistics show high numbers of well-educated people living in Scotland. According to the research of the Office for National Statistics in 2014, Scotland was found to be the most highly educated country in Europe with nearly 40 percent of people aged 16-64 educated.

Aside from intense classes, however, the Scottish exchange students have had some down time, which they spent touring around Kansas, learning about local culture and meeting new people.

“We’ve found a couple of American friends,” said Blue with a big smile on his face. “They took us on adventures.”

Both appeared excited while recalling their new American experiences.

“We got to listen to country music for the first time at the dance our friends took us to. It was so different,” they said. “We don’t listen to that kind of music at home.”

Horne and Blue shared that Scottish music has a major effect on the nation’s culture with both traditional and modern influences. The great highland bagpipe is a famous traditional Scottish instrument as well as various types of drums and hornpipes. These instruments are used at the traditional country-dances, which millions of people all over the world associate with men playing and dancing in kilts.  Besides the folk music, the jazz, pop, rock and fusion are modern, popular styles in the country.

When the students were asked to share their observations on people from the U.S., they said people here are so much more straight-forward than in Scotland and less discreet. They acknowledged that it is easy to see the U.S. as a land of freedom.

The other aspect of American life that Horne and Blue have noticed was the nutrition.

“Back home, our diet consists of mostly homemade food, vegetables and berries that we grow in our own gardens,” said Horne.

They were both surprised that they couldn’t get a meal, or even a salad, without cheese in it.  Their favorite American food, however, was what they tried at Buffalo Wild Wings. They said they ordered so much that they could not finish it all.

“Then, we tried spicy chicken and Alastair cried! It was fun,” said Horne.

In the end, Kansas weather welcomed Scottish exchange students with a warm embrace of the sunlight as Washburn students invited them just as warmly.

“I thought they are a little bit shy when I first met them,” said Kylie Allen, history major. “But as you talk to those students you can see the respect they have for others and for their culture that they so readily represent at Washburn.”