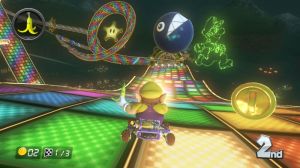 After spending a few days with Mario Kart 8 for the Wii U, I can confirm that it was worth the wait. It’s not a perfect game, but it’s been quite a lot of fun for the short time I’ve been playing it.

The game is beautiful right from the start. The menus are well polished and uncluttered, but where the design really shines is in the tracks themselves. The tracks feel real, with light being reflected by certain surfaces and absorbed by others, but somehow this realism doesn’t clash with the cartoony design of Mario and friends at all. Instead, it enhances the environments around them.

Speaking of the environments, the tracks are very well designed, making good use of the new anti-gravity mechanic. The tracks combine amazing concepts, with well executed track design. For example, at one point a new track, Shy Guy Falls, uses the anti-gravity mode to allow racers to drive straight up a flowing waterfall. Other great moments include racing on a giant Möbius strip on Mario Circuit, driving through the terminals and out onto the tarmac in Sunshine Airport and karting one’s way through a space station in this game’s version of Rainbow Road. All of the new stages are an excellent blend of ground karting, gliding, underwater karting and anti-gravity karting.

The music for the classic tracks has also been updated to fit in with the new tracks. A majority of the music was actually recorded by a live orchestra, rather than being pieced together instrument by instrument, and it shows. The music has much more emotion to it. Whether it’s conveying the hectic nature of Yoshi Valley or the ethereal epic tone of the N64 Rainbow Road, the live performances really emphasize the tone of the track it plays on.

I do have a few complaints however, and one of those is with the choice of playable characters. Specifically, the characters Baby Mario, Baby Luigi, Baby Peach, Baby Daisy, Baby Rosalina, Metal Mario and Pink Gold Peach, as they’re all versions of existing characters that take up a slot that could have been given to a better character. Add to this the fact that Baby Daisy, Baby Rosalina, and Pink Gold Peach had never even appeared in a non-Mario Kart game to begin with, and my reasons for being upset are further justified. If three people in a four player race pick Mario, Baby Mario and Metal Mario the race would be 75 percent Mario! I know the game’s called Mario Kart, but that’s ridiculous! There are so many existing characters more suited to Mario Kart, like Professor E. Gadd, Bowser Jr., Diddy Kong and Nabbit, that wasting slots on babies and metal recolors is very disappointing.

My other complaint is with Mario Kart 8’s bizarre reworking of the Battle Mode, which previously took place in specially designed arenas. This isn’t the case in Mario Kart 8, though and instead the battles take place on normal racetracks, quickly devolving into momentary jousts on the way around the track. The tracks themselves are far too large for any fun battling and the addition of a time limit, further reduces the fun factor. If both classic battling and this new variant had been included, I’d have no complaints, but as it is, this just feels cheap.

Still, despite those complaints, Mario Kart 8 is well worth picking up for the racing mode alone. The courses, music and gameplay work together to create an amazing experience that shouldn’t be missed. The tracks represent new ideas and classic Mario Kart while still pushing the graphical envelope. Plus, if you buy the game and register a code on Nintendo’s website before the end of the month, you can get another Wii U game for free.