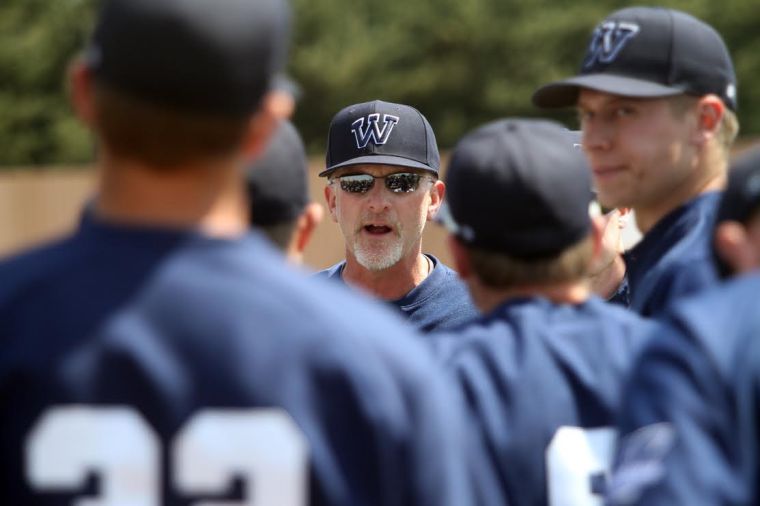 Washburn's Head Baseball Coach Steven Anson talks to players on his team. Anson died in an accident at his residence Sunday, June 22. A memorial event for Coach Anson will take place Monday, June 30 at 4 p.m. at Falley Field.

Over the course of 35 years, Anson coached 1,645 games, throughout which he led the Ichabods to a multitude of successes, both on the individual and the team level. Under his coaching, three Bods received five different All-American awards, 18 of his players were named all-region players, 12 were named to the MIAA first team and two players went on to play in the Majors.

Anson’s overall record at Washburn was 844-798-3 or .520. In 2012 Anson led the Bods to a 27-24 season, one of Washburn’s most successful seasons in recent years which also included Anson’s 800th win. The Ichabods baseball team has eight 30-win seasons with Anson as head coach. Anson was also the most winningest coach in all of the MIAA.

Loren Ferré, Washburn athletic director, said Anson was very involved with his student athletes in trying to help them be successful not only in graduating but in their careers. Anson’s players did well in the classroom, including one player, Andy Petz, being named to the Capital One Academic All-America team in 2011 and another player, Pat Colley, having received second and third team honors in 2000 and 2001, respectively.

“He was always volunteering and he always wanted to do what was best for Washburn and obviously the baseball program,” said Ferré, “But he was just a special person.”

“I met Coach toward the end of my senior year in high school, and every time I saw him he had a hat on,” said Webb. “I’d go to talk with him for an official visit to campus and this guy walked up to me without a hat on and I didn’t know who he was. His nickname, I came to find out was ‘Eagle’ because he was bald. It was a funny beginning to our relationship.”

Besides helping his players in the classroom, Anson also helped them find employment opportunities.

“He would bend over backward for you and do anything,” said Webb. “I can’t remember how many summer jobs he got for me and a lot of the other players. If we needed work, he would do his best to find it for us through the people he knew around town. That’s the type of guy he was.”

Webb stayed in touch with Anson after graduating and saw him just him last month.

“I stopped and talked to him for about 10 minutes,” said Webb. “You could tell his passion for the game was still there and he didn’t look like he was thinking about quitting anytime soon. He had been there for 30 – 35 years and I don’t think he had any intention of slowing down at all.”

Jerad Head, one of Anson’s two players to play in the MLB, said Anson was much more than just a coach.

“My first thoughts of Coach A are not just as a coach,” said Head. “He was one of a kind. One of the most genuine individuals I have ever met. He was about more than just baseball. He was a great man who had an impact in all of his players lives. It was truly a pleasure to have the opportunity to play for Coach A. Not only was he a great coach, he was even a better person.”

Friends, students and others in the Topeka community are commenting on Twitter, leaving messages to commemorate his passing. The hashtag #Anson19 was created by the Washburn Athletics program.

“Privilege to work with such a great coach, mentor and friend,” said Austin Hills. “Thoughts and prayers to family and friends #Anson19.”

“He always had a smile on his face,” said Jake Lebahn, radio host of 580 Sports Talk and graduate of Washburn on Twitter.

Anson’s passing has touched not only the Washburn community but much of the collegiate sports community as well. Multiple sports organizations and colleges have sent their regards to Washburn and Anson’s family. Newman Athletics and University of Nebraska at Kearney are among those who have offered their thoughts and prayers.

Anson led his last team to a 26-24 overall record during its regular season. The Bods lost the series, 1-2, against Emporia State University in the final game in the first round of the MIAA Baseball Tournament.

Anson is survived by his wife, Dena, who is the university relations director at Washburn.

Details on the accident and services were not available Monday morning.

“I just couldn’t believe it when I heard it yesterday,” Ferré concluded. “It was just one of those things you hear and you are not really sure that you’re hearing what somebody is saying. It takes a while to sink in. He’ll be greatly missed.”

UPDATE: Dena Anson has announced that a memorial event will take place Monday, June 30 at 4 p.m. at Falley Field.